"True compassion does not discriminate."

While the recent bushfires resulted in an unprecedented loss of animal lives, the outpouring of concern, distress and generosity we witnessed from across the world so clearly reinforced to us that animals matter to people — they matter deeply.

When people around the world saw photos of koalas or kangaroos impacted by fires, their hearts reacted and filled with the desire to help and alleviate the suffering of these animals.

The images of burned cattle and sheep may have been far fewer in the media — but when the spotlight focussed on their suffering these animals, too, instantly activated our hearts in sorrow and distress for all they had endured.

And therein lies the 'silver lining'; the precious insight from this tragedy that fuels our belief in our ability to create a kinder world for all animals. True compassion doesn't discriminate. 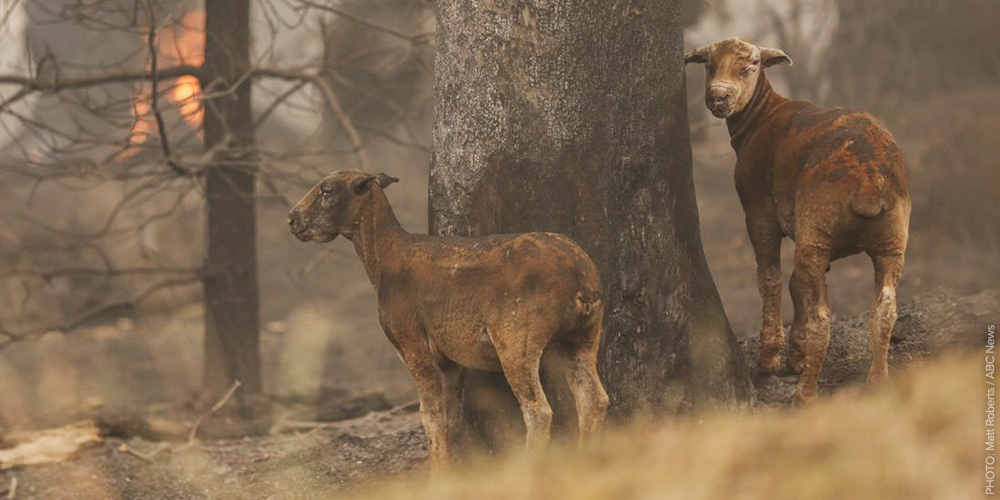 So many remain unaware that we've been programmed from a very young age to categorise animals based on the 'role' they play in our lives — to place greater value on the protection of some than others. Yet what these bushfires have revealed is that our hearts don't discriminate.

This realisation helped the Animals Australia team overcome a lingering concern and question... How do we talk to the many people who came to us through their concern for bushfire affected wildlife about the other animals who we seek to assist on a daily basis and why?

Would we alienate them if we tried to explain why a great deal of our work focuses on transforming thinking around the treatment of farmed animals?

The conclusion we reached was 'no' — not if we spoke to their hearts. Because when our hearts lead the way — we care about them all.

Like so many people around the world, the Animals Australia team grieved over the suffering of over 1 billion animals in the fires. Yet as animal advocates we were also aware of another staggering figure that speaks to a story of global animal suffering that often remains untold.

That each year, globally, some 70 billion animals are born into human created and controlled systems and endure lives and deaths no less heart-wrenching than the animals in the fires.

And that's why the Animals Australia's team dedicates a great deal of time representing the interests of farmed animals. Because while compassion doesn't discriminate, the laws that exist to protect animals do.

A mother pig confined in a 'farrowing crate' with her piglets. She will likely be trapped in this cage, barely able to stand and unable to turn around, for weeks. Inflicting mental and physical suffering like this is completely legal in Australia.
Photo: Bear Witness Australia

There is a conspiracy of silence around this unpalatable truth. It is not in the interests of animal industries, or the governments who support them, to highlight the exemptions in animal cruelty laws nor the consequences for animals who fall in these categories.

That these decades old laws are 'out of step' with community sentiment has never been more evident than through the extraordinary wave of caring and compassion towards animals displayed in recent weeks.  So how could this system have come to be when we know that all animals share the ability to suffer?

If slaughterhouses had glass walls, the world would be vegetarian.

Paul 'got' that at a heart level we don't discriminate in how we feel about animals — which is why animal food industries have gone to such lengths to 'keep the blinds down'.

The more hidden that farmed animals became from the community — whether in factory farms, large outback properties or in slaughterhouses — the easier it became to maintain the laws that allow them to be treated cruelly.

Even the language that is used around farmed animals serves to separate our hearts and minds and convince us that they are 'commodities' rather than sentient beings.  Think 'livestock' for example. Cattle 'producers' is another.

The language being used by industry representatives around the suffering and deaths of up to 10 million sheep and cattle in the recent fires provided insights into generations of mental programming.

There is no doubt that farmers would have been traumatised by witnessing the animal suffering and felt compassion for the animals they were unable to protect — but industry representatives chose to speak to the commercial implications rather than these animals also being tragic victims of a natural disaster.

Probably one of the saddest parts, I think, for a lot of the producers, will be to lose their lines and the genetics that they will have been working on for a long time.Paul Martin, saleyard manager

Why wouldn't animal industry representatives have spoken to the farmers empathy for these animals?  Because traditionally the language that is used around farmed animals assists to depersonalise them and maintain emotional separation.  After all, these animals are raised to be slaughtered — opening one's heart to them comes with all sorts of complexities and implications.

But it's time to realise that so do laws that allow cruel practices to be inflicted on farmed animals.  Inflicting excruciatingly painful practices without pain relief — such as dehorning, mulesing, spaying, debeaking, tail cutting/docking or severely caging animals and denying them quality of life — impact both humans and animals. Legally permitting these cruel practices force those who work in these industries to quieten their conscience and quell their compassion when it is the most noble and needed of human virtues.

When harrowing images from the recent fires of the bodies of sheep lining barbed wire fences, of cattle with burnt feet so painful they can no longer stand, were published by the media — not language, nor conditioned thinking, not discriminating laws, could hold at bay the compassion and distress felt for them.  All of the mental programming that causes us to think about them differently dissolved.  We all simply wished we had been able to protect them from harm.

It is a simple truth that true compassion does not discriminate. We do care about them all.

It was impossible not to feel helpless during the recent bushfires. We witnessed the power and ferocity of a natural force that took all who were within her path. But we also witnessed something extraordinary awaken in the heart of our global community that, if harnessed, has the power to help countless animals — in Australia and around the world. 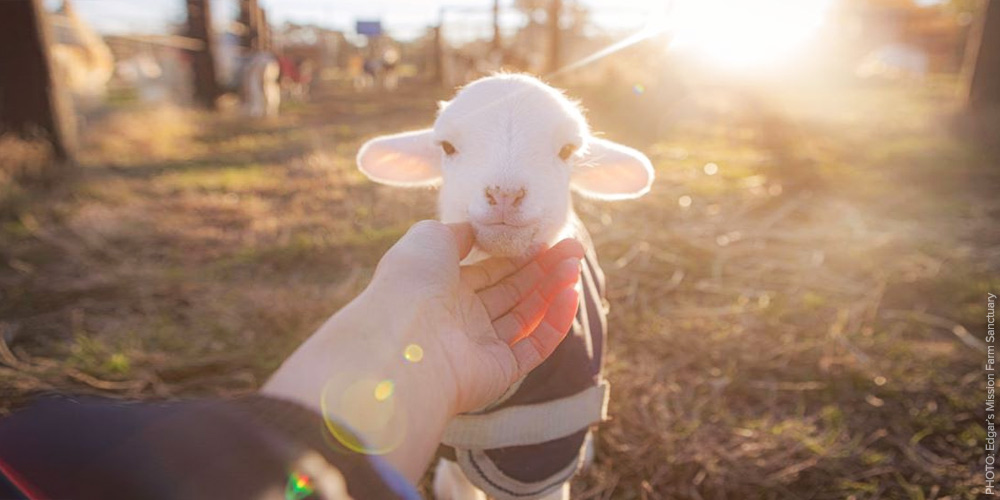 A resident at Edgar's Mission, a sanctuary where rescued 'farmed' animals — such as sheep, cows, pigs, chickens, goats and more — are finally free to live their lives in peace and safety.
Photo: Edgar's Mission Farm Sanctuary

These fires revealed to us how deeply the animals who share this Earth matter to us. That it matters not whether they hop, burrow, walk, climb or fly — or whether they are covered with skin, fur, fleece or feathers — they all matter.  Our hearts respond to them all.

2020 has been a year like no other in terms of the challenges we are collectively facing. One of the consequences of COVID-19 virus, is that life, for a time, will be very different. We will be disconnecting from our normal frenetic mental routines, and have time to reconnect with our selves, our families and the wisdom of our hearts.

Many throughout the world felt powerless to help animals during the fires, but we have an opportunity now, even if confined in our homes to help bring about a kinder world for them.

What do animals most need us to do?

First and foremost: to question.

The events of 2020 have called on us all the harness the best in us. To put aside our differences, to act as a global community towards the benefit of all.

This is truly a time, as the great Mahatma Gandhi said, to "Be the change you wish to see in the world": To live our daily lives consciously and compassionately — mindful of the suffering of others, and where we can alleviate it.

The suffering of the animals in these fires awakened the best in us. If we can harness this, it will not just be the animals who are the beneficiaries... it will be us all.

For the animals... and for a kinder world...

"We see you": These are the 'invisible' animals hidden from view in factory farms

PHOTO CREDIT: The magnificent photograph of a cow and person sharing a moment of curiosity at the top of this page is by Christin Hume at Unsplash.