13 incredible images that will inspire you to help animals

Meet the 'invisible animals'. Used by so many — but seen and understood by so few. Photojournalist Jo-Anne McArthur is on a mission to make them visible.

The first step to overcoming and preventing animal cruelty is to first realise that it exists — sometimes hidden in plain sight, right under our very noses.

This is the core theme of Jo-Anne McArthur's haunting and inspiring photographic collection, We Animals: an extensive global series which captures the personal experience of individual animals' lives, amongst the unknown billions who are bred, kept and farmed for human use every year.

McArthur's lens is focussed on these 'invisible' animals who are trapped in systems designed to keep their suffering hidden from the world — but whose plight her photographs shed much-needed light on.

Powerfully disturbing. These images take us to dark and hidden places visited by only a few determined and courageous individuals like Jo-Anne McArthur.Dr. Jane Goodall

McArthur's deeply moving and ever-growing photographic series has been opening eyes, hearts and minds to the reality of our relationship with animals around the world for the last 15 years.

At times harrowing, in other moments joyful, the We Animals Archive is a testament to McArthur's dedication to making the invisible, visible.

Her aim is not to traumatise people but, instead, to imbue each and every one of us with the inspiration and willpower to help these most defenceless of living beings we share this planet with. 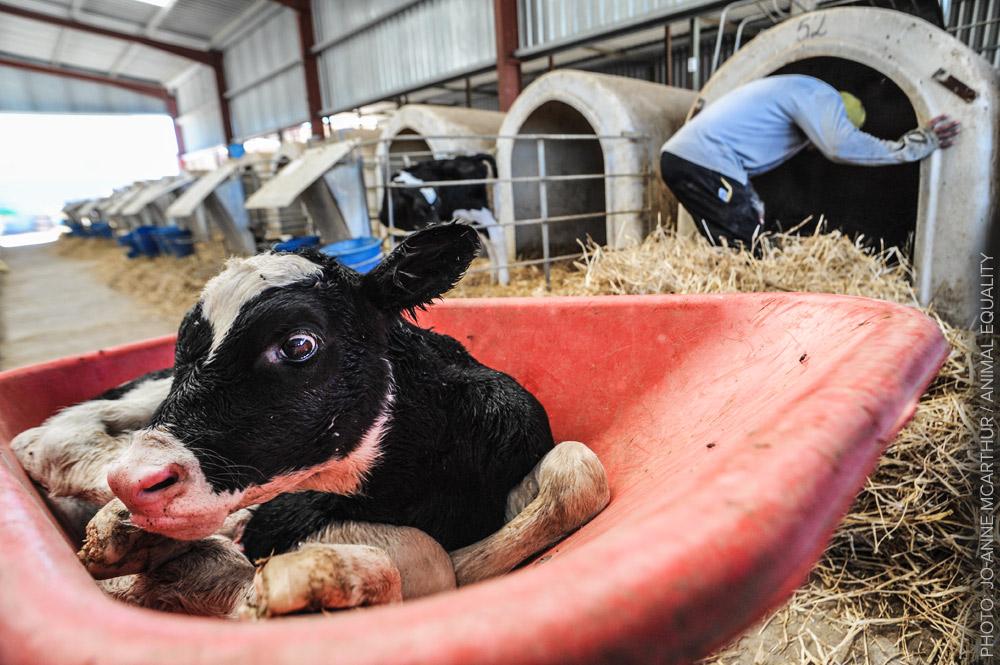 1. The calf who has been taken from his mother.

'Bobby' calves are the dark secret of the dairy industry. In Australia, hundreds of thousands of these male newborns are taken from their mothers, and killed in their first week of life — all so that their mothers milk can be harvested for human consumption. Elsewhere throughout the world, 'veal crates', such as these, are common — where bewildered males calves are chained, restrained and 'fattened' before being sent off to the slaughterhouse.

Lend your voice to calves like him: tell the dairy industry babies aren't 'waste products'. 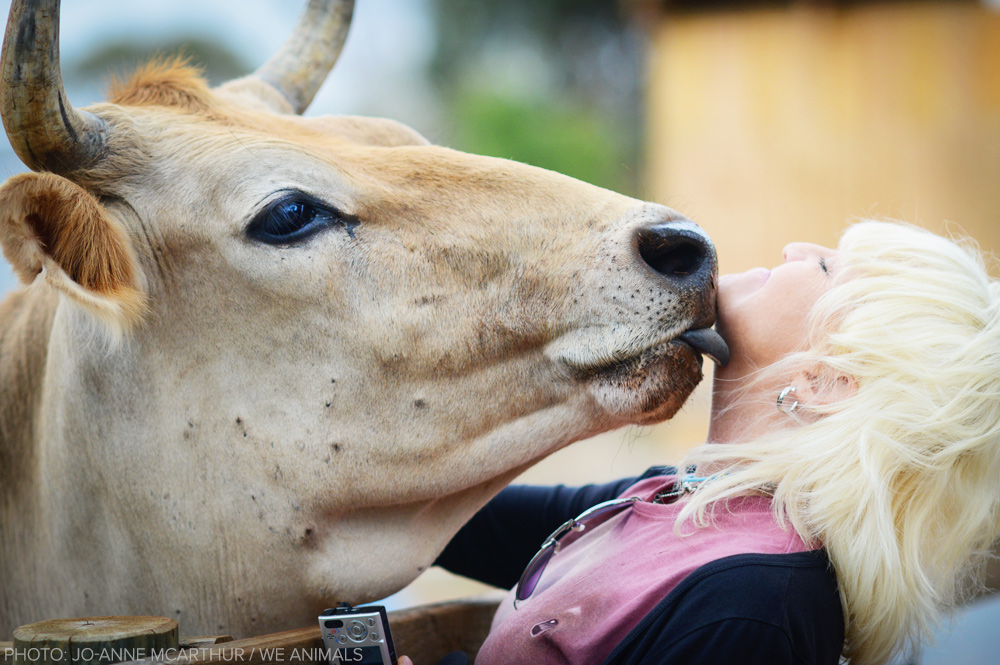 Born on a dairy farm, Hansel was taken from his mother when he was just a young calf, and loaded onto a truck bound for the slaughterhouse alongside other 'useless' male calves. But, thankfully, his story didn't end there... Rescued at the last moment by someone who couldn't bear to see this brown-eyed beauty killed, Hansel now lives at Edgar's Mission Farm Sanctuary, where he has been given something denied to so many thousands of male calves — the chance to grow up.

Discover how easy it is to help spare more calves like Hansel by enjoying delicious dairy free alternatives to milk, chocolate, cheese and more. 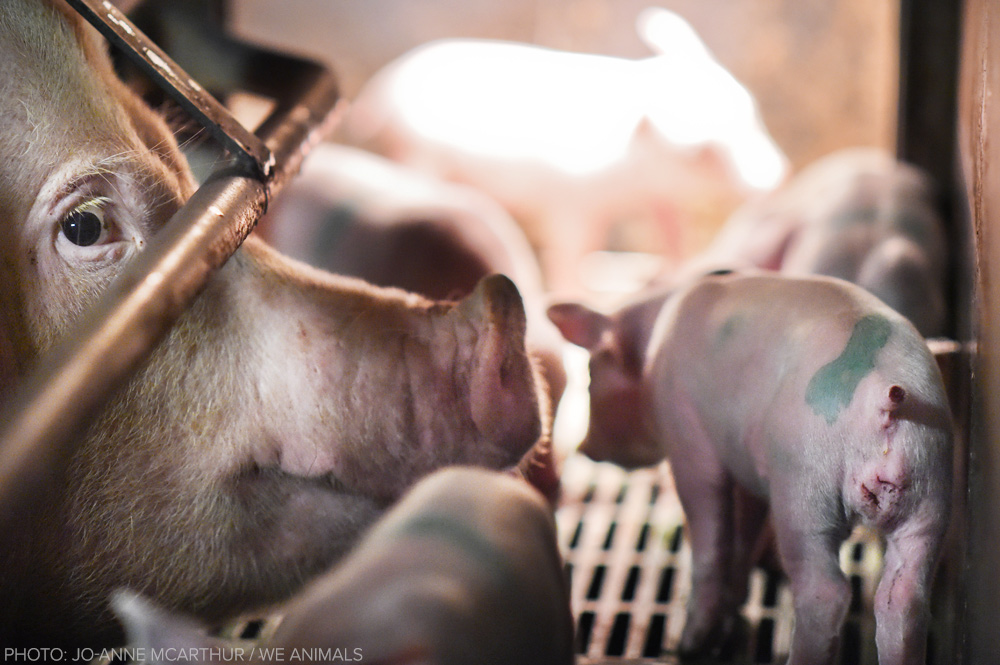 3. This mother who just wants to reach her baby.

This mother pig did the best she could to care for her piglets from the confines of a factory farm 'farrowing crate'. Yet she was forced to watch on as they each had their teeth cut and tails severed through the bone — without any pain relief. If they were male, they may have been castrated at the same time. All of this pain inflicted on defenceless animals is 'standard' industry practice.

Whether they're a pig, a cow, a hen or a human, there's something most mums have in common — to watch their babies grow up. Find out how you can help make this dream come true. 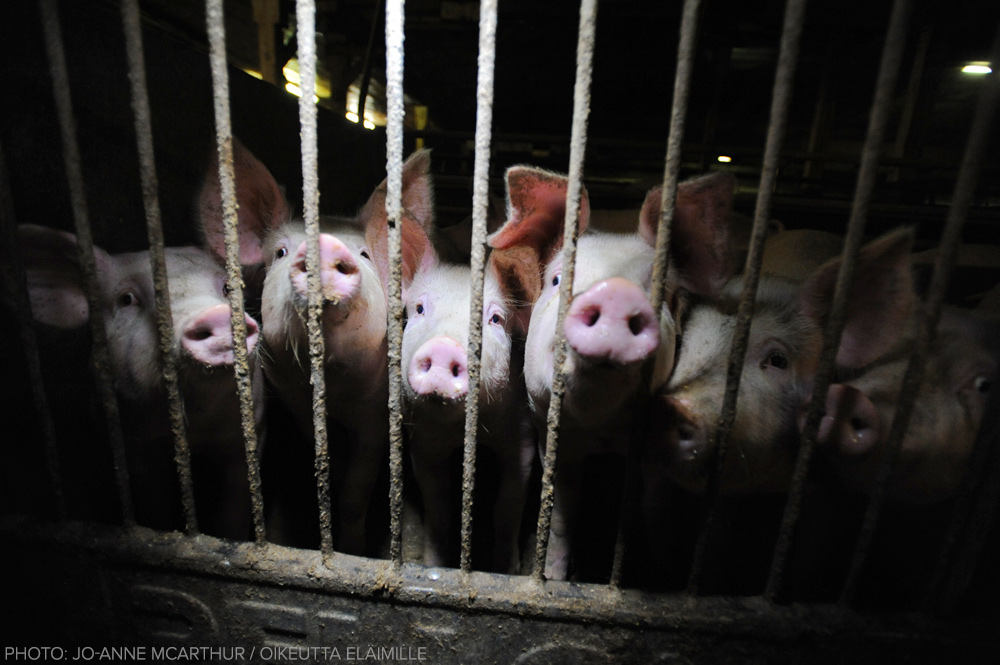 4. These pigs who have never felt the sun on their faces.

Pigs are highly intelligent — and have even been observed playing video games! Yet, in factory farms, these clever and curious animals are confined in crowded, barren pens with no quality of life whatsoever. McArthur says that people rarely want to believe that these images she shows them of animal cruelty and suffering could ever possibly be occuring in their own country, and yet:

Whether the pig is in Australia, Sweden or Italy, the conditions are appalling, the confinement is severe and her suffering is real.Jo-Anne McArthur

Wherever animals like these pigs are farmed en masse, there will be deprivation, fear and suffering. But by reducing the demand for products like pork, bacon and ham you can help spare animals from factory farm cruelty — get all the details in our free Veg Starter Kit. 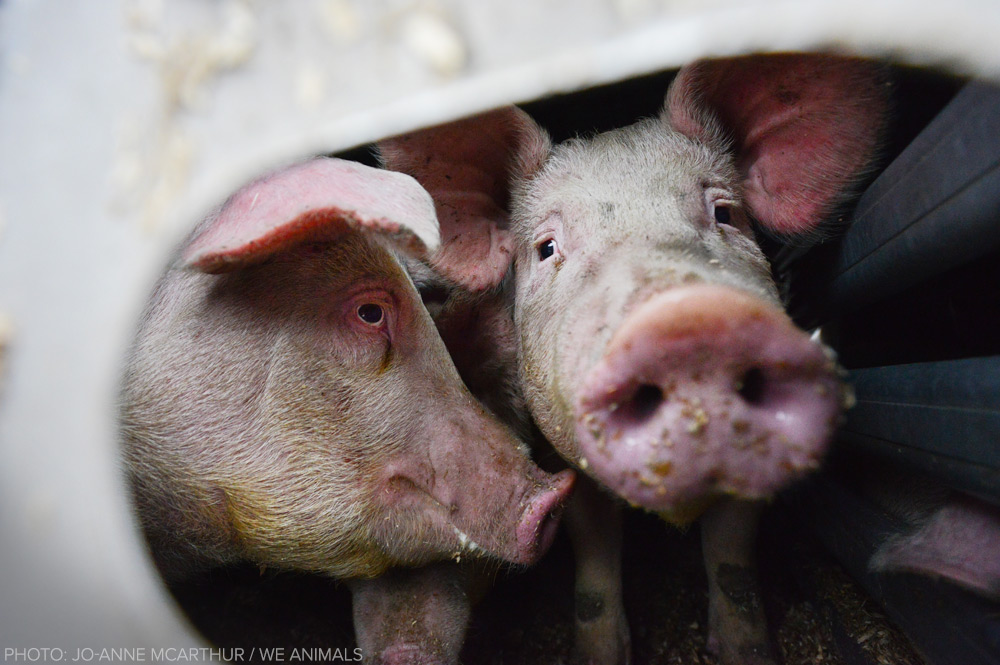 5. The pigs who only have hours to live.

The first time many pigs will see the outside world is on the last day of their lives — from narrow slits in the back of a cramped truck on the way to the slaughterhouse. Whether they've been raised as factory farmed or free range pigs, these highly sensitive animals will all risk a horrific death in gas chambers.

You have the power to help spare pigs from this terrifying fate. 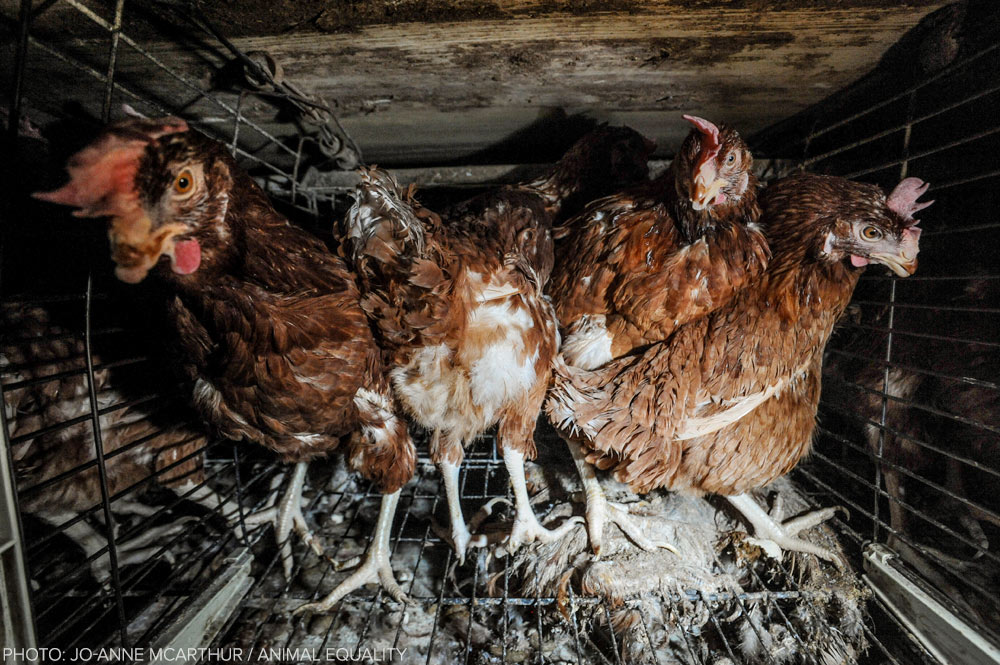 6. These hens who are forced to share a cage with a dead friend.

A hen's natural impulse is to build a comfortable nest to lay her eggs. To perch, to explore, to dustbathe in the sun, and to stretch her wings. But in cage egg farms, these social and curious animals are denied these most basic of freedoms. With up to tens of thousands of hens kept in a single shed, individual care is near impossible — with studies suggesting that 1 in 6 caged hens lives in chronic pain with a broken bone.

So how different are free range egg farms? How about barn laid or organic? The answer might surprise you. 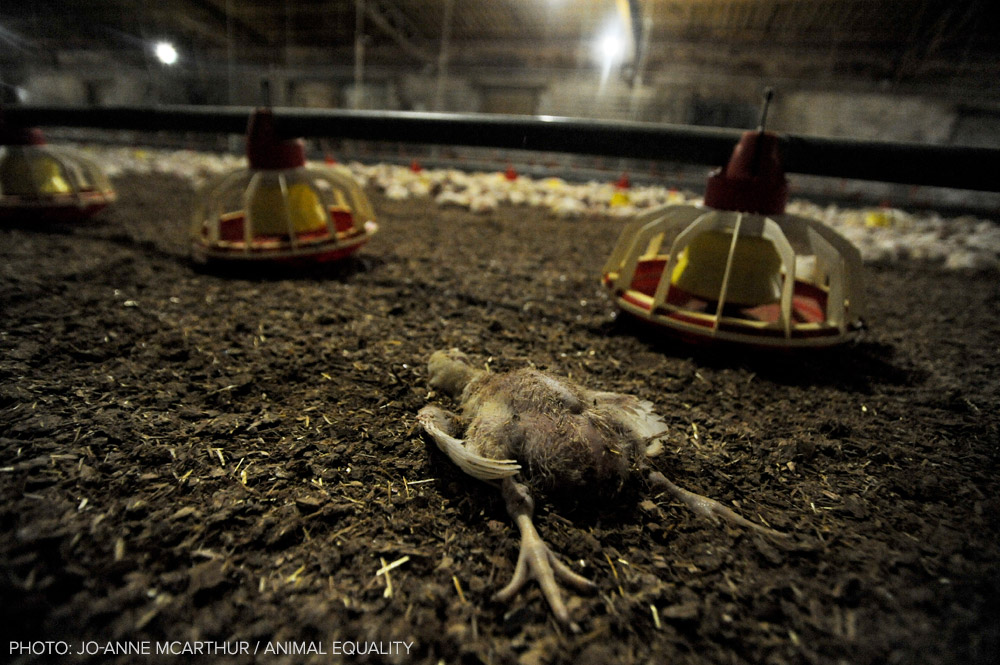 7. The chick whose death was 'just a statistic'.

Chickens farmed for meat fare no better. Even though they are killed at barely 6 weeks old, conditions inside most farm sheds are so appalling that a staggering 20 million young chickens suffer and die every year before reaching 'slaughter age'. Most shocking of all is that — instead of improving conditions for the chickens — factory farmers expect and 'write off' these tragic deaths in their financial plans. Extreme suffering is all just part of doing business on a factory farm.

But there is good news. From crunchy golden nuggets and old school parmas, to stir-fry strips and fancy fillets, you can enjoy them all without harming any chickens at all: Find out how. 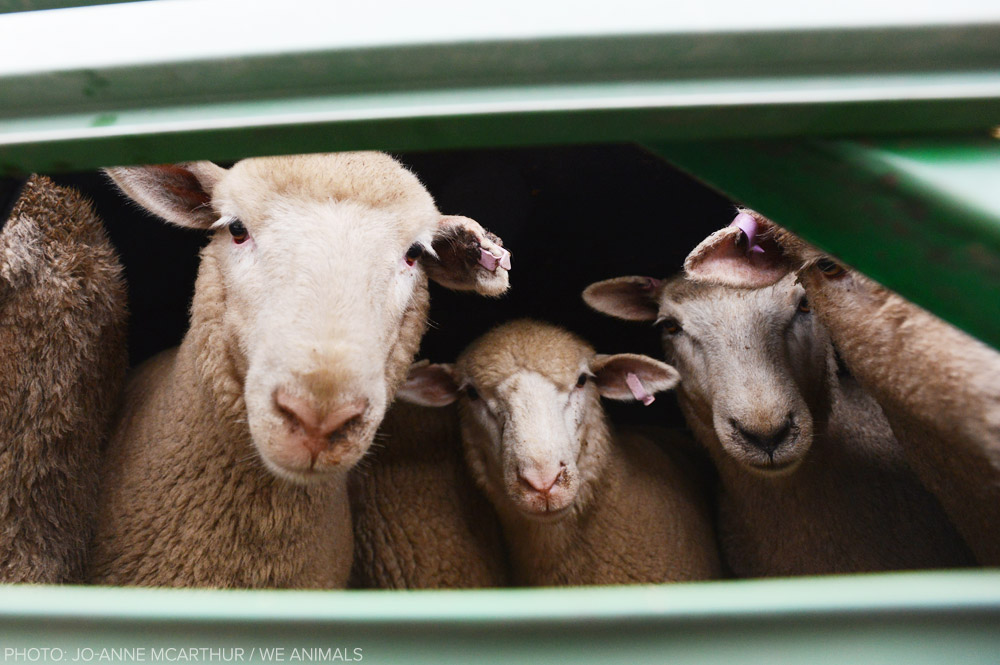 8. These sheep who don't know things are about to get a whole lot worse.

Rounded up from wide-open paddocks, crammed into trucks — even in the middle of sweltering summer days — the gruelling journey has only just begun for these young Aussie sheep. They'll be loaded onto a live export ship, and the ones who survive that 'hell on the high sea' will be sold in countries where there are no laws to protect them from extreme cruelty. Our investigations have revealed shocking routine abuse and brutal slaughter of exported Australian sheep, cows and goats — with most exported animals forced to endure excruciating, fully conscious slaughter.

You can lend your voice to the victims of live export right now, right here. 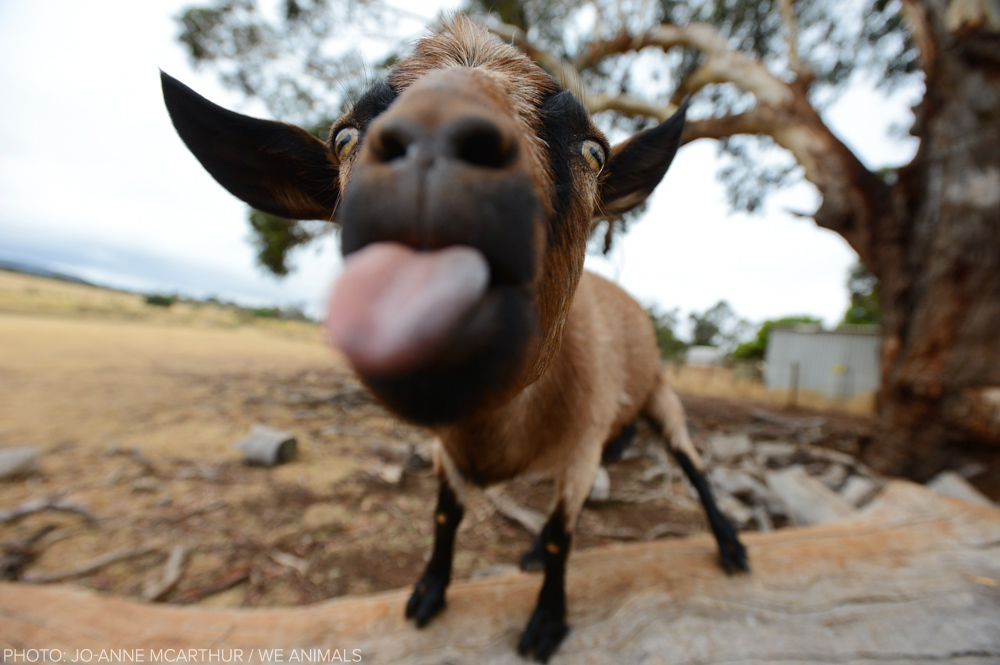 9. The goat who will only ever know kindness.

He might be small in size, but he makes up for it with his HUGE personality. Kenny is a resident at Edgar's Mission Farm Sanctuary in Victoria, Australia. He's one of the lucky few who has found peace, safety — and a whole lot of tree stumps, other animals, and people, to climb on, over, and bounce off. Usually in the pursuit of that most desirable of foods: a handful of Weet-Bix!

Non-human animals have unique personalities but they are so rarely given the opportunity to express those personalities or be who they are.Jo-Anne McArthur 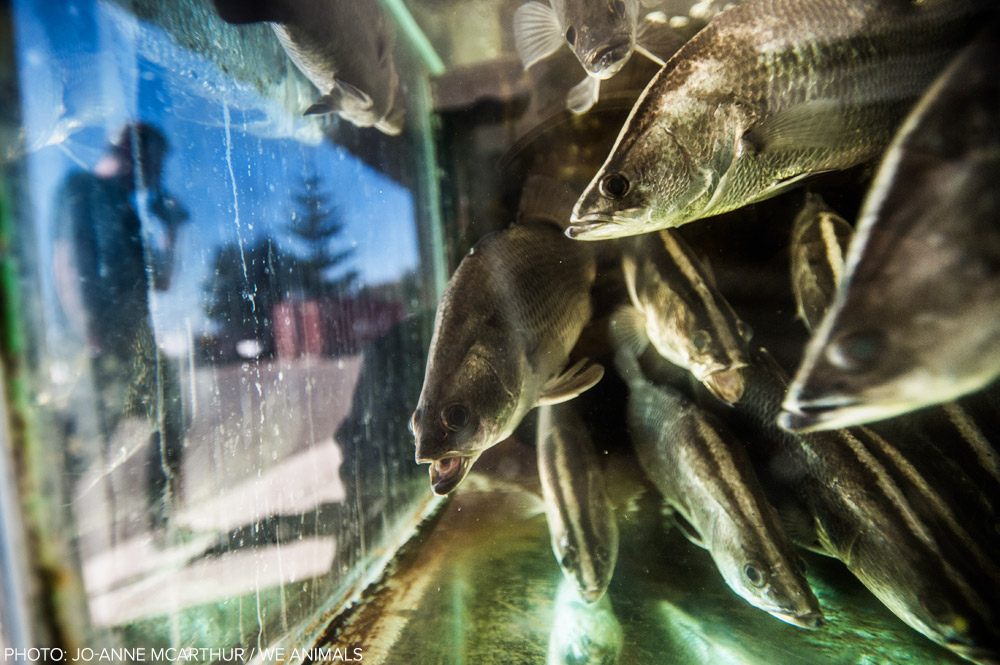 10. The fish who have never swum in open water.

Even animals who, at first glance, seem so alien — are often moved by the same impulses that motivate us. To be free from pain, and to enjoy life to the fullest. Bred in an Australian fish farm, these barramundi have never known freedom. Bundled into plastic bags, they are sold alive — and face potentially agonising and inhumane slaughter in private homes.

But with amazing animal-friendly alternatives to seafood now available, you can help let marine animals like this swim free — while still tucking into a crispy, golden fish supper! We've got more great tips like this in our free Veg Starter Kit — you can order a free copy today. 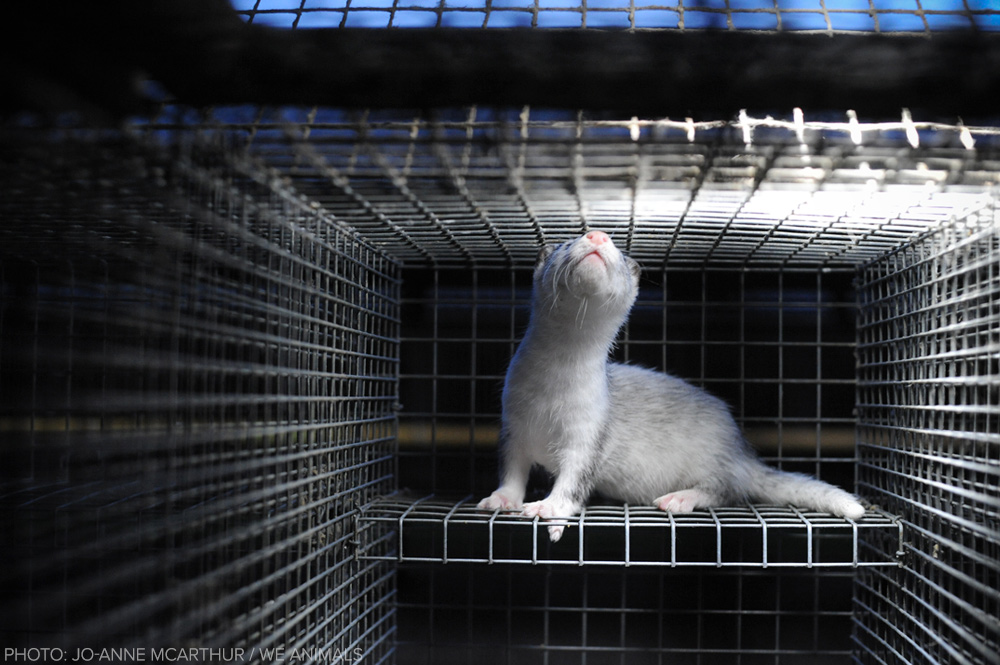 Whether he was caught in the wild in a painful trap, or bred in captivity — this mink's gaze is drawn irresistibly towards the sky, and the wide world outside. Animals like him, who are slaughtered for their fur, are killed in the cruellest ways imaginable, all in order to preserve their 'valuable pelts'. But there is nothing more valuable than kindness, and the freedom to live one's life in peace — whether you are a mink, a dog, a sheep, or a human.

An ever-growing number of designers and shop owners are recognising that fur belongs on animals, not clothes hangers. You too can take a compassionate stand for the animals by pledging to be fur free! 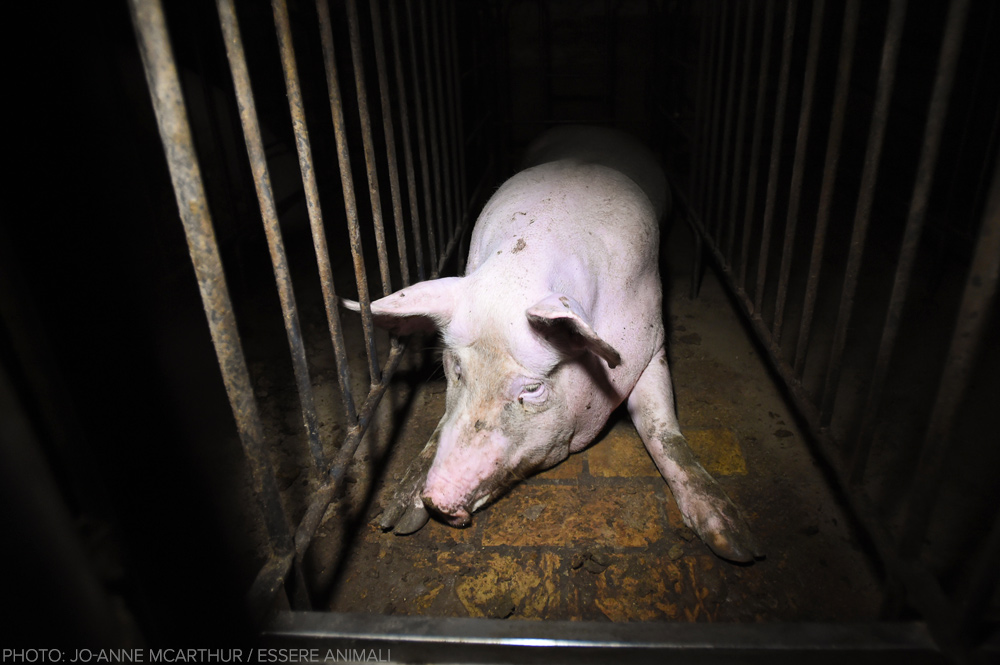 12. The expectant mother who will be forced to give birth in a cage.

The demand for ever cheaper meat has resulted in animals like her paying a terrible price. Ultimately, the best way to protect animals from harm in factory farms and slaughterhouses is to cut back or cut out our consumption of meat, egg and dairy products. Find out how easy and delicious that can be with our Veg Starter Kit — order your free copy right here.

All the arguments to prove man's superiority cannot shatter this hard fact: in suffering, the animals are our equals.Professor Peter Singer 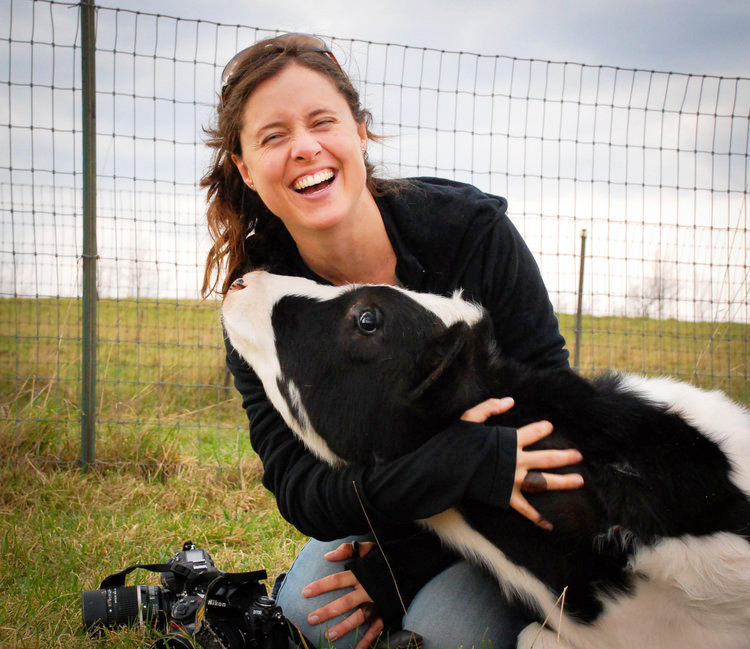 13. The photographer who is determined to share their stories.

Jo-Anne McArthur has spent her career shining a light into dark places. At times, it has been hard — really hard — but she persists with her work, and can keep on smiling, because she knows the incredible animals in front of her camera need her to be strong. They need her to not look away. They need her to tell their stories to the world — and they need us to listen.

Although the world is full of suffering, it is full also of the overcoming of it.Helen Keller

In that generous spirit, McArthur is offering her incredible photographic collection for free to students, educators, designers, campaigners — and all compassionate people who are working in their own, unique ways to make the world a kinder place for everyone. 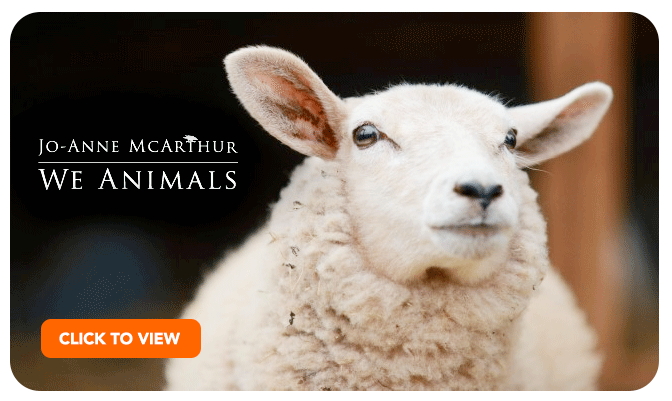