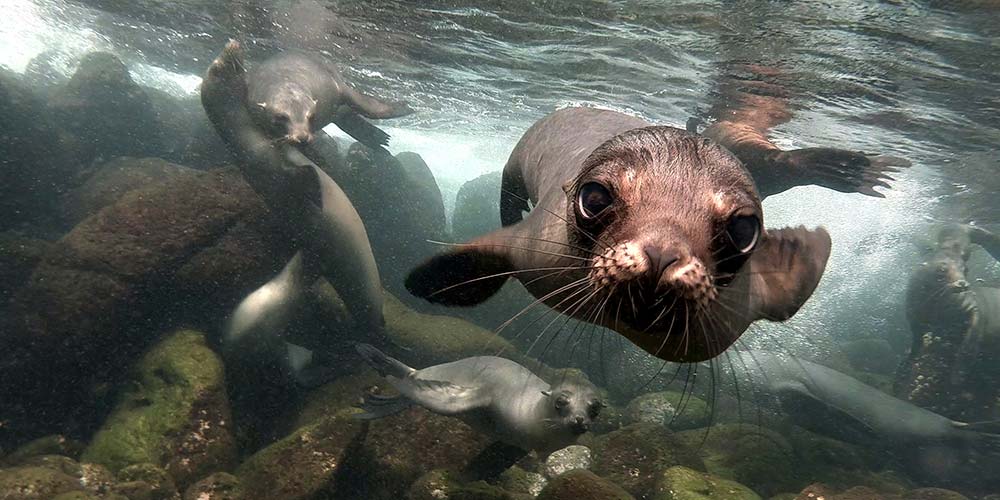 Salmon farming in Australia: ‘protected’ seals shot at and bombed.

Lead-filled 'beanbag' projectiles, cracker devices and shotguns – no, this isn’t a war zone. These are fish farms.

Here’s how Australian fish farms are impacting the environment and harming native animals – and the simple but powerful way you can take action.

Imagine you’re a fur seal. You’re going about your day in search of a fish. There appears to be nothing in your regular spot, but on your swim back to shore you happen across the largest school of fish you have ever seen.

There appears to be a barrier in front of you, so you head to the surface to investigate. Suddenly, loud bangs deafen your ears and hard projectiles ricochet off your body. This is Australian fish farming.

The Australian salmon farming industry uses a number of devices to ‘deter’ seals from approaching what these native animals of course see as their natural food source — fish. These devices include:

Australia’s coastal waters are home to some of the most diverse and unique marine life on Planet Earth. Some of these species are seals and sea lions.

When they are not resting, these inquisitive animals spend time foraging for their next meal. Although diet varies between species, their diet usually consists of fish, squid, octopus, and crustaceans. They have been known to travel vast distances and dive to great depths in search of prey. In recent years, seals and sea lions have found a new location to source food, but this comes at a great cost.

Fish farming in waters surrounding Australia is a disaster for fish populations. Every year, millions of smaller ‘baitfish’ like sardines and anchovies are caught using destructive methods, such as seine nets or gillnets, to feed farmed fish.

Due to the destructive nature of commercial fishing, species such as seals and sea lions are unable to forage for prey and have turned to where they can find food easily – fish farms and fishing vessels.

To read more on how fish farms are emptying our oceans, click here.

Native seals are maimed and killed

The sheer volume of fish caught by commercial fishing vessels naturally draws seals. Seen as a nuisance by fishermen, horrific techniques have been used to try and ‘deter’ marine animals from ‘stealing’ their catch.

One of these methods is the use of ‘seal bombs’ – an explosive device that is ignited and thrown in the water. The sound of the blast carries for kilometres and the blast way can be damaging if nearby, causing trauma or even death to any marine life that is in close vicinity.

Another method used by the aquaculture industry is the use of beanbag bullets. These consist of hard pellets wrapped in a cloth sock and fired from a shotgun. Beanbag bullets are associated with riot control but are commonly used to deter marine life away from fish farms. Official documents have revealed that over 8,700 ‘beanbag’ bullets have been fired at seals and sea lions around aquaculture sites since 2013 – including incidents where seals have been blinded, deafened, and severely injured as a direct result.

According to government data, 23 seal deaths occurred on Tasmanian salmon farms in just over a year (from the start of 2021 until the end of March 2022). One company alone, Huon Aquaculture, used 8,057 underwater explosives against seals in that period, and was responsible for 18 of the 23 seals who were killed.

Government wildlife biologist, Sam Thalmann, pointed out in a document released to Environment Tasmania that reported estimated seal deaths by salmon companies were likely underestimated, as seals injured by deterrents would leave the area and could die elsewhere. This means the number of seals suffering and dying could be even higher.

Some species of seals and sea lions are listed as endangered on both the EPBC Act (Australia) and the IUCN (global).

Certain fisheries around South Australia must report the death of a sea lion directly to Australian Fisheries Management Authority (AFMA), actioning an investigation which can result in closing areas to fisheries.

The seal fur trade between the 16th and 19th Century eradicated all but one species of seal from the Bass Strait – due to conservation efforts seal populations have increased. Now, their greatest threat is loss of habitat and food due to fisheries, along with entanglements from fishing gear.

You can help protect seals, sea lions AND fish

Seals and sea lions are some of the lesser-known victims of the fishing and ‘seafood’ industries – but we each have the power to take a stand against this cruelty, and we can start today.

Reducing or replacing animal products in our meals is not only the most profound way to reduce animal suffering, it is also best for the planet and for us as well. Eating plant-based is easy, delicious and it’s getting more popular, every single day.

You’ll find all the information you need, plus a selection of delicious recipes, in our Free Veg Starter Kit. Order your copy here. Or if you’re ready to get cooking right away, then you might like to browse our favourite seafood alternatives along with some incredible recipes at VegKit.com!