They chose to do nothing about it, and hoped no one would find out.

Most Australians believe in doing the right thing. But sadly, an industry that Aussies trusted has chosen to line their own pockets rather than do the right thing for animals.

Thousands have been shocked to learn that the prawn industry cuts eyes off female prawns to make them breed faster.

A 1995 Australian Prawn Farming Industry report reveals that the industry has known for more than 20 years that cutting eyes off prawns was a bad idea. 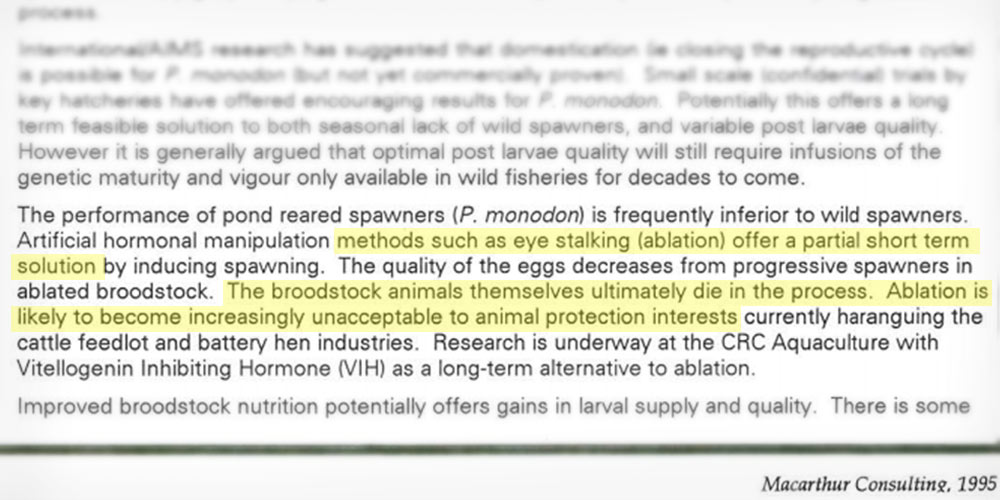 The report says that eyestalk ablation offers a “partial short term solution" and that “ablation is likely to become increasingly unacceptable to animal protection interests."

Despite describing themselves as a ‘proactive industry’, 22 years have passed since this report and the prawn industry are still cutting eyes off prawns.

We know that alternatives exist. One large Latin American prawn producer, SeaJoy, has already stopped using eyestalk ablation on their breeding prawns, and research has indicated that given the right environment, prawns will breed naturally.

The prawn industry got one thing right — this practice is unacceptable. No animal deserves to lose an eye for the sake of profit. More than 27,000 people have emailed the Australian Prawn Farmers Association asking them to end this cruel practice. The industry has yet to respond to these concerned individuals.

Even though they knew the Australian public would disapprove, the prawn industry kept cutting eyes off live prawns — choosing to inflict suffering on countless animals, and make money from Australians who never got a say.

Finally, it’s time to have your say. Join thousands of others in demanding the Australian prawn industry stop cutting eyes off prawns.

Many Australians have also chosen to protect prawns from prawn farms and trawling nets altogether by leaving them off their plate. If you’re interested in finding out more about the benefits of plant-based food, both for animals and for yourself, order a copy of our free veg starter kit.