BREAKING NEWS (13th June 2020): The live export industry’s “independent regulator" has today made the outrageous decision to grant an exemption — condemning tens of thousands of sheep to be shipped from an Australian winter straight into the blistering heat of a Northern summer. TAKE ACTION NOW »

56,000 sheep will NOT be sailing into the furnace of the Northern summer after live exporter denied exemption to export during dangerous — and banned — Northern summer period.

In the days leading up to June 1st — when strict new laws prohibiting dangerous summer live export shipments came into effect — WA media revealed that there had been a COVID-19 outbreak on board the Al-Kuwait live export ship that had just returned to Fremantle after offloading in the Middle East.

As the Federal and State governments battled it out over who was to blame for the ship being allowed to dock — and local port workers boarding the vessel — attention quickly turned to the fate of 56,000 sheep awaiting export in a WA feedlot. These sheep were due to be loaded onto the ship to be exported for slaughter in Kuwait and the United Arab Emirates — but the delays meant that it was likely this would not be possible before the Northern summer ban kicked in.

Before anyone could breathe a sigh of relief that tens of thousands of sheep could be spared from the horrors of live export… it was then revealed that the export industry regulator could grant an exemption that would allow sheep to be shipped straight into the blistering Middle East summer.

So, we sprang into action.

Animals Australia threw everything possible at this to ensure the regulator had all of the facts needed to make the right decision. Perhaps most critical was the analysis we provided this week from an expert climatologist that warned if the ship set sail, it would be sending animals directly into the ‘danger zone’ for heat stress. 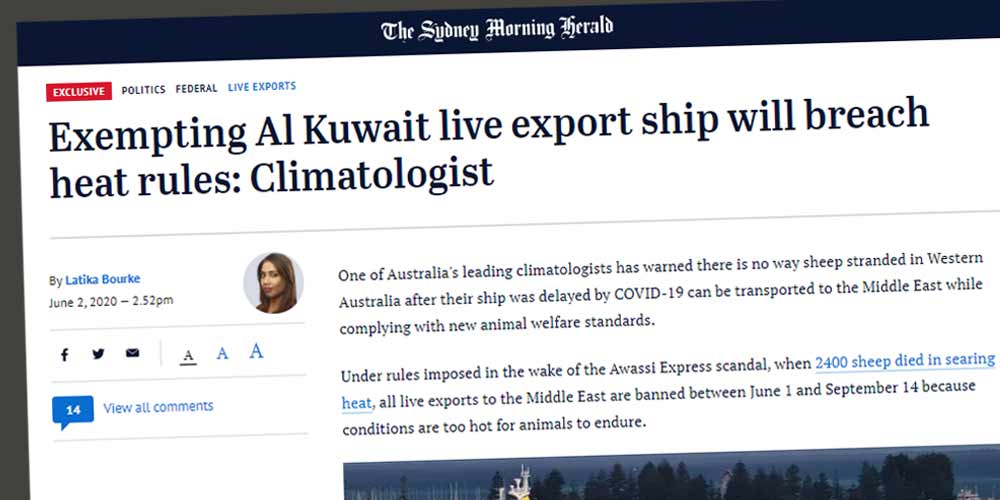 Animals Australia provided the Department of Agriculture with an expert analysis of forecast temperatures across the Persian Gulf in coming weeks, indicating that there was a high risk that sheep would sail directly into the ‘danger zone’ for heat stress if the Al Kuwait was given an exemption.

Thousands of caring Australians have spoken up in recent days, writing to their MPs to demand that laws be upheld and no exemptions granted.

And last night we received official word from the Department of Agriculture that 56,000 sheep will NOT be sailing into the furnace of the Middle East summer.

We are enormously relieved that no exemption will be granted. It is so very important that laws instigated to protect vulnerable animals are upheld and we are grateful that the regulator has put the interests of animals ahead of the interests of live exporters.

Sadly, there will be no ‘happy ending’ for these sheep who will now go to local slaughterhouses in WA. However, they have been spared the extended and extreme suffering of weeks at sea where the risk of ‘cooking alive’ from heat stress is very real. And they now will not face painful fully conscious slaughter.

The live export industry has also been sent a very strong message: they are no longer above the law. They can no longer expect to ‘call the shots’.

The fight to end live export continues. But now, in this moment, we can breathe a sigh of relief that 56,000 sheep destined to endure the horror of live export will not step foot on one of these ‘floating ovens’. The summer ban stands.

Since June 1st, a three-month live export ban has come into effect — the result of the public exposure of the routine and extreme suffering of sheep exported from Australia at this time of year.

Few people would forget the horrific images of Australian sheep covered head to toe in melted excrement and struggling to breathe; literally cooking alive from the inside out in the bowels of a live export ship.

Such unavoidable suffering from heat stroke — documented in years of official voyage reports — formed the basis of the Australian Government’s decision to prohibit sheep being exported to the Middle East from June to mid-September. 2020 was the first year these new laws would come into effect. In fact, when announcing them, the Department said: “The changes will see improved animal welfare with a focus on conditions to manage the risk of heat stress during the northern hemisphere summer."

Despite the disappointment of knowing that exemptions to this law are possible, we are heartened that the ban has been upheld — and can breathe a sigh of relief in knowing that — for the next three months at least — no Australian animals will endure the extreme suffering of live export.