10 things you need to know before you buy farmed fish

Fish farming is a growing industry — set to double in the next 15 years. Here are 10 things to consider before you eat fish from a farm:

1. Fish farms are polluting the seas

Many off-shore fish farms let faeces and food waste fall directly into the ocean below. The build-up of this waste can destroy marine ecosystems on the sea floor below, before eventually flowing into the ocean.

2. Fish in farms are eating up wild fish

Tuna and salmon are carnivores. And just like other farmed animals, they eat more than they produce. Every year, millions of anchovies, sardines and other small fish are caught from the ocean to be fed to fish in fish farms. Australia's largest salmon farmer, Tassal, uses 2 kg of wild caught fish in feed to produce just 1 kg of farmed salmon.

Some fish farms are trying to reduce the number of wild caught fish they use by substituting vegetables, chicken and other land animals into fish feed. This change in salmon's natural diet makes the flesh of salmon turn an unappealing grey colour. So salmon farmers include a synthetic compound called astaxanthin in fish feed which dyes fish flesh the pink colour salmon eaters expect.

Naturally, seals are drawn to fish farms as a food source. In an effort to deter them, some fish farms fire beanbag bullets at seals who approach the farms. Documents have revealed that more than 8,700 bullets have been fired at seals around aquaculture sites in Tasmania since 2013. The ABC reported that there have been incidences of seals being blinded and deafened as a result of being hit by one of these beanbag bullets.

Seals attempting to get into a fish farm

5. Many fish suffer from disease

The cramped environments in fish farms allow for disease to spread rapidly from fish to fish. Amoebic gill disease is a parasite which thrives in warm water, making it a common threat to fish in Australian farms, particularly during summer.[1] The parasite deteriorates their gills, making it difficult for fish to get enough oxygen, eventually causing heart collapse and death if left untreated.

There are a range of other viruses, bacteria and parasites which can affect fish in farms, often with tragic results.[2] In 2018, more than 1 million fish died from pilchard orthomyxovirus (POMV) in fish farms in Tasmania. 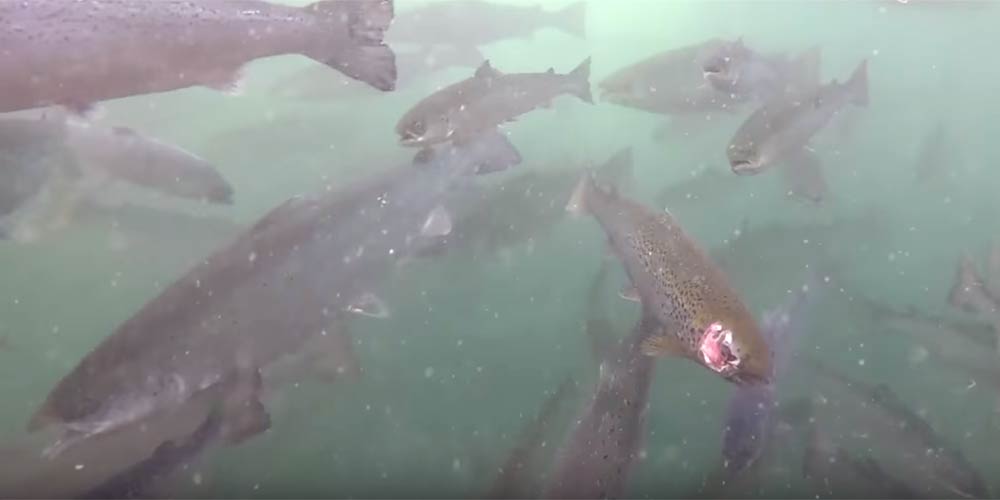 Read enough? Every time you choose plant-based meals, you spare fish and all animals from cruelty and slaughter. Get started today with a free veg starter kit.

6. "Bathing" fish is stressful and dangerous

Amoebic gill disease can be washed off fish in a process called 'bathing' which involves pumping fish through a tube into a freshwater tank, and then returning them to their sea pen. In summer months, fish may be 'bathed' as often as every 30-40 days.

Processes like this are very stressful for fish and can result in injuries and mortalities, and in some instances mass deaths. In 2016, more than 175,000 salmon were killed 'by accident' during treatment for sea lice in farms in Scotland. In 2018, a Tassal farm in Tasmania killed 30,000 fish during a 'bathing' treatment, citing 'human error' as the cause.

As many fish are farmed in sea cages in the open ocean, the prevalence of diseases in fish farms is a serious threat to ocean ecosystems as disease can spread into surrounding waters and infect wild fish populations.[3]

On top of the risk of death from disease, salmon are sensitive to environmental changes such as temperature spikes and dips in oxygen levels. The build-up of waste on the sea floor under fish farms can negatively impact oxygen levels, as can the stocking density of fish, water flow, water temperature and a range of other factors. When oxygen levels drop, fish become stressed and struggle to breathe. In 2015, 85,000 salmon suffocated to death in a salmon farm in Tasmania due to a change in oxygen levels.

Atlantic salmon prefer cool waters and in the wild, they can migrate huge distances to find temperatures where they can thrive. In farms, their movement is restricted to pens, and when the temperature rises, they have no escape. In a New Zealand salmon farm, a large number of fish died when water temperatures rose to 18 degrees in 2015. The spokesperson for the farm refused to reveal the number of mortalities.

As many as 1 in 4 fish in fish farms show signs of severe depression and simply "give up on life". These fish have stunted growth and can be seen floating lifelessly at the surface. The research concluded that depressed fish exhibit behaviours and brain chemistry almost identical to those of very stressed and depressed people. 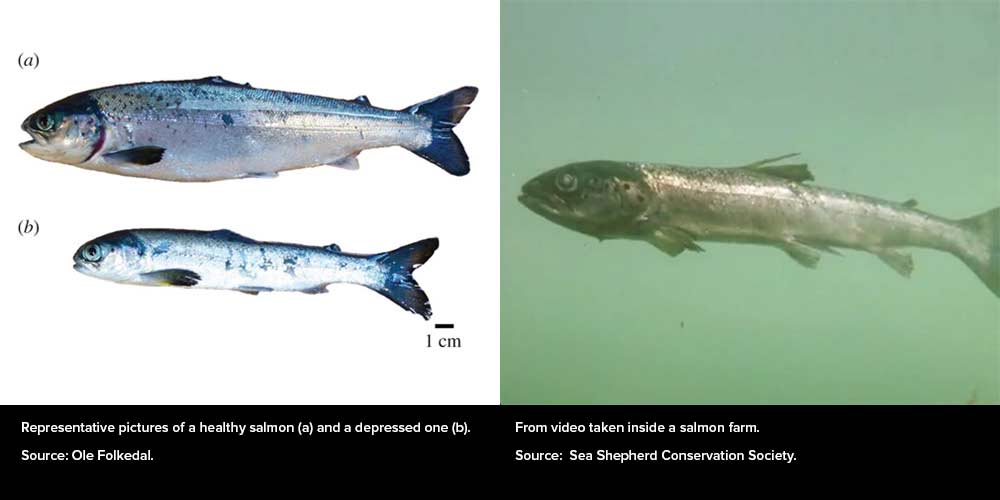 Fish are more intelligent than many people give them credit for. Living in crowded tanks where they have to compete with others for food and swim monotonously in circles is a stressful and unnatural environment for a fish. Just like pigs and chickens in factory farms, fish in farms live a life of suffering.

10. Escapees from fish farms could be a threat to local ecosystems

Fish escape from sea pens both in an everyday 'trickle' which is around 2-3% of fish stock (amounting to thousands upon thousands of fish every year), and through major escapes as a result of storms, net tears and other causes. The fish farming industry is required to report major escapes of more than 1000 individuals. In 2000-2006, a total of 208,000 salmon were reported to have escaped in Tasmania in 11 escape episodes.[4] With the industry growing, so are these numbers. In 2018 one incidence unleashed 120,000 salmon into Tasmanian waters, and 2020 saw yet another outbreak occur, with the escape of 50,000 Tasmanian farmed salmon — giving further rise to fears among environmentalists that the breach could potentially "pollute" the marine environment and seriously impact local ecosystems.

There is little research done into the impacts and fate of farmed salmon being released into Australian waters but some research suggests that, as carnivores, they could decimate wild fish populations. Others suggest that they are unable to survive in the wild and slowly starve to death.

You can take action for fish (and all animals) into your own hands by choosing kinder, sustainable plant-based meals. Get started today by ordering a free vegetarian starter kit.

It's clear that there are some serious environmental and welfare concerns to do with fish farming. So is fishing from our oceans more sustainable? Here are 6 things to consider:

Scientists have warned that if we continue to pull fish out of the sea at current rates, ocean ecosystems could collapse by 2048.[5] If we want to allow oceans to continue to survive and thrive for future generations, we need to let wild fish populations recuperate from the destruction we've caused and leave sea animals in the sea. 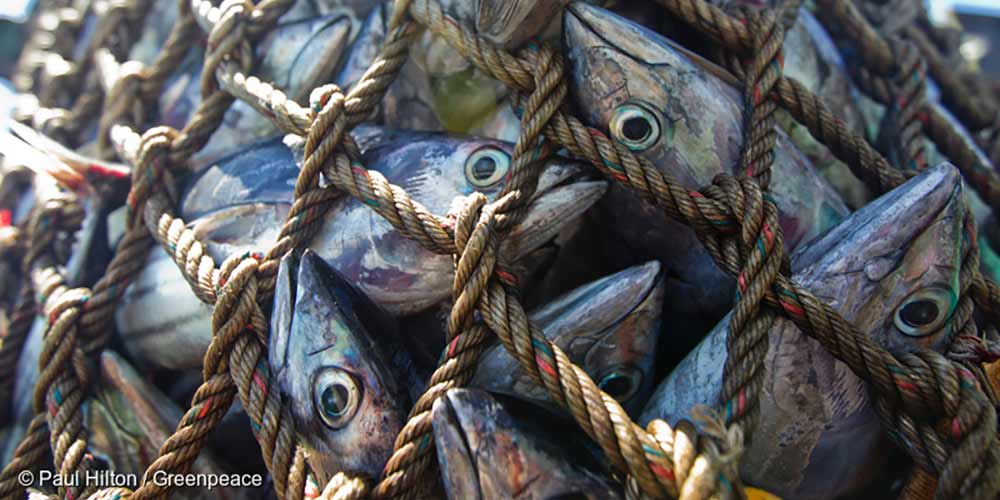 When fish are pulled out from the depths of the ocean, the change in pressure can cause their eyes and internal organs to burst. If they survive this, they may be crushed to death under the weight of other animals in the enormous nets. For most, death comes as they slowly suffocate on the decks of ships. We would never stand for this extreme suffering of animals on land. But out in the middle of the ocean, no one can see their suffering.

Fish aren't the only animals who are under threat as a result of fishing. Fishing nets catch dolphins, sharks, turtles, stingrays and any other animal in their path. If they are thrown back into the ocean, many are injured, in shock and in some cases dead or dying. 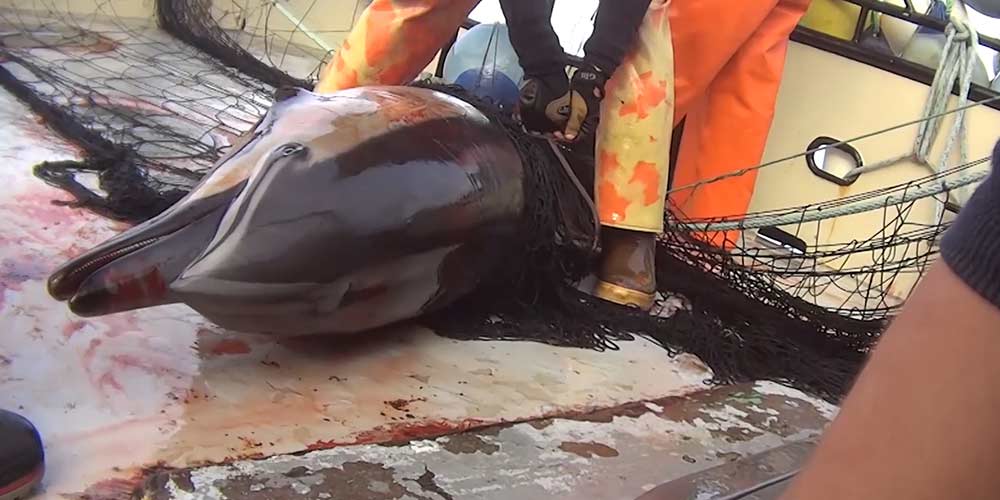 A recent study analysing the contents of the world's largest floating patch of garbage, discovered that a whopping 46% of it was fishing nets — with the majority of the rest being made up of other discarded fishing gear such as ropes and traps. The fishing industry is not only emptying our oceans of fish, it's filling it with trash!

Discarded fishing nets, known as ghostnets, kill more than 130,000 seals, whales, and dolphins every year, and mutilates thousands of others. 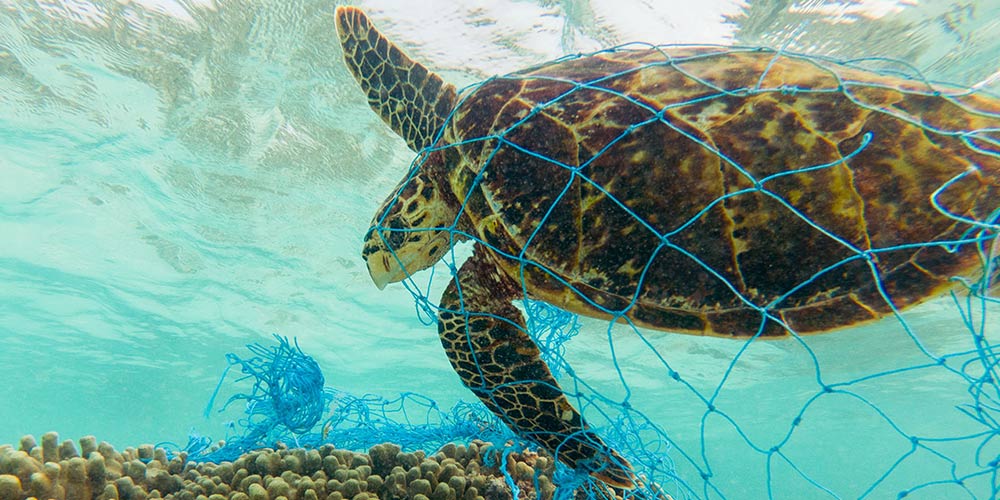 6. Plastic in guts of fish

The amount of plastic in the ocean is not only a threat to animals — it's a threat to humans! Scientists have found microparticles of plastic in the bodies of humans as a result of eating fish and other sea animals who commonly ingest plastic. The researchers expressed concern that humans could be ingesting dangerous toxins through these plastic particles.

Sadly, whenever animals are farmed (or fished) for human consumption, we see the same things — environmental destruction and a disregard for animal welfare. Just like pig and chicken farms, fish farms eat up resources, create tons of waste and inflict a huge amount of suffering. And commercial fishing is emptying oceans, destroying ecosystems and leaving nets behind to take even more lives.

It's no surprise that 1 in 3 Australians are turning to kinder, sustainable plant-based meals. Eating plant-based reduces your environmental impact and spares animals from cruelty. A plant-based diet can provide all the nutrients your body needs to thrive, including omega 3.

Keen to find out more? You'll find all the information you need, plus a selection of delicious recipes, in our free veg starter kit! Order your copy here. Or if you're ready to get cooking right away, then you might like to browse our collection of 100+ scrumptious plant-based recipes at VegKit.com!

You won't believe it's not bacon (or sausage! or ham!)

16 'meaty' meat-free meals – The flavours you love, no meat

You won't believe it's not chicken...

How to eat deliciously dairy-free!