Our culture ... or our choice? What Bali's dog eating culture can teach us about our own behaviours

Much to the outrage of animal lovers, a rife trade in dog meat was exposed by Animals Australia in one of Australia’s favourite holiday destinations — Bali. What does our outrage say about us?

Every year, seven times more dogs are slaughtered in Bali than in China’s notorious Yulin Dog Eating Festival. Thousands of dogs and puppies — many of them stolen pets — are butchered for human consumption.

Dumped in bamboo crates, terrified dogs await the nightly slaughter with legs tied and mouths taped shut. They may be left like this for several days, without access to food or water, until eventually, one by one they are slaughtered in full view of their companions.

While those eating dog in Bali represent a small section of the community, consumption of dogs is growing and as Animals Australia’s investigation into the Bali dog meat trade has documented, unsuspecting Australian tourists are among those eating them. 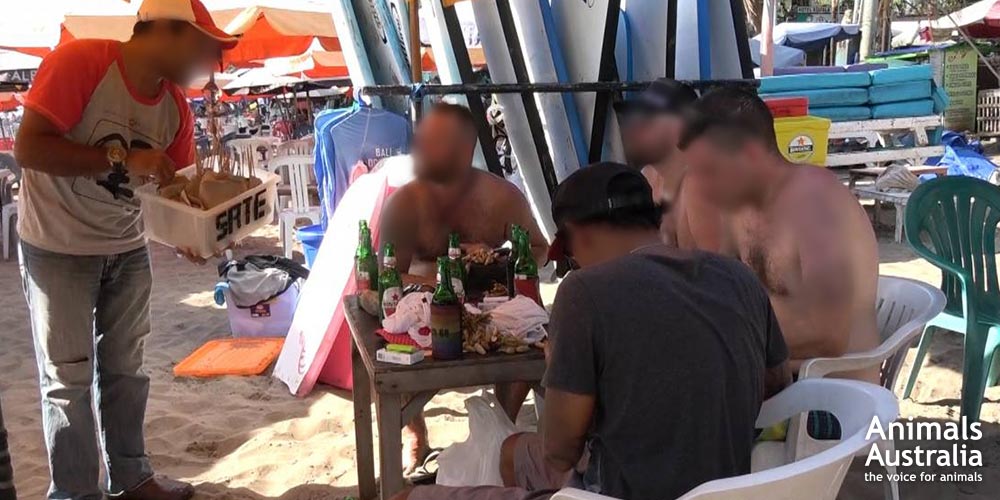 As distressing as this news is, there is comfort to be found in the public outrage that is accompanying it. Worldwide, concern for animals and their welfare is on the rise — as is the public’s determination to force positive change. If you haven’t done so already, you can add your voice to calls to save Bali’s dogs by ending the Bali dog meat trade.

If the petition is successful and the Bali dog meat trade is outlawed, this will be a great victory for animals and may save many lives. But without ‘cultural’ change, Bali’s dogs will always be at risk. Only when those who have been culturally conditioned to see dogs as ‘food’ widen their circle of compassion and see them as worthy of love and respect, will Bali’s dogs truly be safe.

To a Westerner, it seems unfathomable that some people might see no ethical problem with consuming ‘man’s best friend’. To many Indonesians who have grown to love dogs as pets — the practice is just as unthinkable. But for the Christian ethnic minority in Bali, whose ancestors have eaten dogs for generations, the power of cultural conditioning is profound.

It’s nearly impossible to comprehend until you realise that wherever we live in the world, we are all victims of the very same cultural conditioning …

We too have been raised into a society that has normalised the slaughter and consumption of highly intelligent animals — animals who are capable of experiencing fear and suffering — often in horrific ways.

Our outrage at the killing of dogs in Bali speaks volumes about who we are. When we see an individual who is unfairly abused, we want to help protect her. We’re compassionate. We’re kind-hearted.

The truth is that eating cows, pigs or chickens is no more natural or necessary than eating dogs.

And fortunately, we too have an opportunity to create a kinder, more caring society by widening our circle of compassion to those who we have been taught to think of as ‘food’, rather than as thinking, feeling individuals. The truth is that eating cows, pigs or chickens is no more natural or necessary than eating dogs. We’ve simply inherited a way of thinking and eating without even realising it. Recognising this gives us the freedom to make choices about what we eat that are true to our values as compassionate human beings.

When we look at animals through our own eyes, rather than the lens of inherited thinking we can instantly appreciate cows, sheep, chickens, fish and pigs for the unique and curious individuals that they are. Scientists now know that cows have best friends; that sheep can learn to respond to their own name; that chickens exhibit cognitive abilities beyond that of young children; fish experience a range of emotions, including playfulness; and that pigs show empathy and can play computer games designed for chimpanzees…

They are in fact, all extraordinary in one way or the other — and even more so when you realise that each individual animal or fish is unique in the same way that every individual man or woman walking down a city street is.

Understanding this uniqueness and that they share our ability to suffer, instantly changes one’s perspective on laws that allow animals raised for food that suffer such abuse — in modern day factory farms and slaughterhouses.

That man’s best friend is eaten in some cultures and their suffering ignored, only indicates the power that inherited thinking has over us. Asking ourselves, ‘have I too been indoctrinated in a way of thinking without realising it?’ can be life-changing and life-enhancing for us and for all animals.

That man’s best friend is eaten in some cultures and their suffering ignored, only indicates the power that inherited thinking has over us.

We all hope to do something meaningful and memorable in our lives — what we don’t realise is that the opportunity is always at hand. Freeing our thinking and allowing our eyes to look at animals through the lens of compassion rather than ‘culture’, will free them from cycles of suffering that they have been trapped in for generations.

What greater contribution could you make than creating a pathway to a kinder world … By choosing to eat meat-free, we can impact the lives of animals in a very real way, every single day.

Did you know that pigs are even smarter than dogs, and they wag their tails when they’re happy?

More and more Australians are recognising that all animals deserve better and joining the global movement in kinder eating. In fact, Roy Morgan research indicates that an Aussie decides to reduce their meat consumption or go meat-free every 5 minutes!

Want to help protect all animals from cruelty?