He is one of the dairy industry's hidden victims.

The separation and killing of calves is perhaps the dairy industry's biggest secret. But you can help calves like him be seen – and spared.

Dairy milk is a mother’s milk – made for her calf. For that milk to instead be used to produce commercial dairy products, calves born on dairy farms are forcibly taken away, and many are killed.

At no fault of their own, they have been bred into a commercial industry, where animals are valued in terms of what they produce. Separated from their mothers and confused, some calves try to suckle for food and comfort, turning to the ears, tails and other body parts of fellow calves. Many of them will be killed in the first few days of their life…

He will never produce milk, so the industry deems him ‘worthless’.

He wants little more than the comfort of his mother – to feel safe next to her, drink her milk, and learn from her. But in the dairy industry, he is dragged away.

She may bellow and call out for him for days, but he won’t get to hear his mother’s painful cries. Out of sight of compassionate consumers, at less than 24 hours old, he may be killed with blunt force trauma to the forehead, or be shot with a gun or a captive bolt. Or, within days of his birth, he might be trucked to a slaughterhouse alongside other bewildered calves, where one by one they will be forced down a slaughter line to face electric stunning or a captive bolt before having their throats cut.

Considered low value ‘by-products’ of the dairy industry, their bodies and skin will be used to make pet food or leather products.

Due to the consumer demand for dairy, this is the sad fate of hundreds of thousands of unwanted ‘bobby calves’ each year in Australia, and countless more around the world. 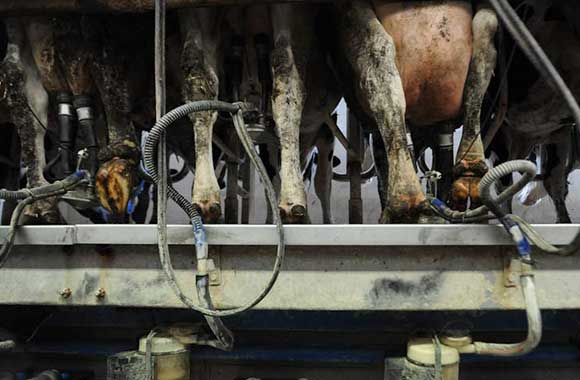 Dairy cows, as we know them today, have been ‘modified’ by the industry to produce thousands more litres of milk than is natural. In just 40 years, selective breeding and feed manipulation have doubled the amount of milk a cow produces, despite the strain it puts on their bodies and the painful health issues caused.
Image Credit: Jo-Anne McArthur / We Animals Media 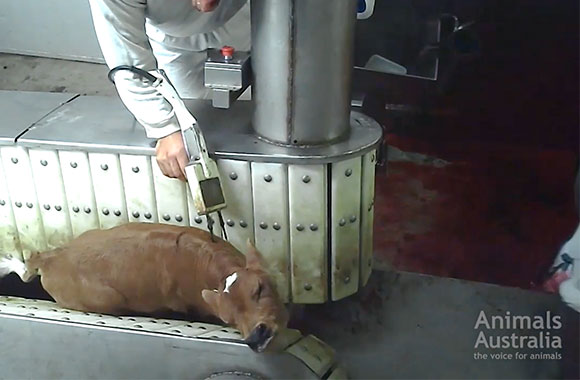 The story of a female calf is just as sad.

After a stressful separation from her mother, she will either share the same fate as male calves or be raised to join the milking herd, where she’ll be forced to live an unnatural life of almost-constant pregnancy. But she will never get to nurture her young. She will endure years of having calf after calf taken from her, until she is considered ‘spent’ and sent to the slaughterhouse.

Some of her fellow female calves will be raised and end up on live export ships to China or elsewhere in Asia. To fill the region’s increasing demand for dairy, they will be forced to make the gruelling journey by sea, only to suffer the same cycle of dairy production at their destination.

“Dairy farming is cruel and unsustainable. Taking babies from their mothers and abusing and exploiting their reproductive systems and their bodies is inhumane…I really do believe that cows have one of the most wretched existence there is. … I would do anything to not have them go through that now.”

Like all animals, cows and calves deserve to be valued for who they are.

Most of us have inherited the thinking that ‘farmed’ animals are all the same, but every animal is a unique individual. The personalities of cows are as varied as those of the dogs, cats, and other companion animals in our lives – they can be bold, timid, curious, or affectionate. What they do have in common, however, is their ability to feel – to experience joy as well as sadness and suffering.

Cows have complex social lives. They have a herd hierarchy and select an intelligent and confident group leader. Beyond the strong mother-calf bond, they form cooperative grooming partnerships with certain herd members, indicating they have ‘best friends’. And just as we find comfort in the presence of our nearest and dearest, when these preferred friends are by their side, a cow’s stress levels reduce (and vice versa, they become stressed when separated).

Social and sensitive, these animals are worthy of respect and compassion – just as everyone deserves.

After a long European winter, these joyous cows leave no question as to whether farmed animals experience emotions. Captured in this video is a glimpse of the kinder world for animals that is possible, and is in the making. 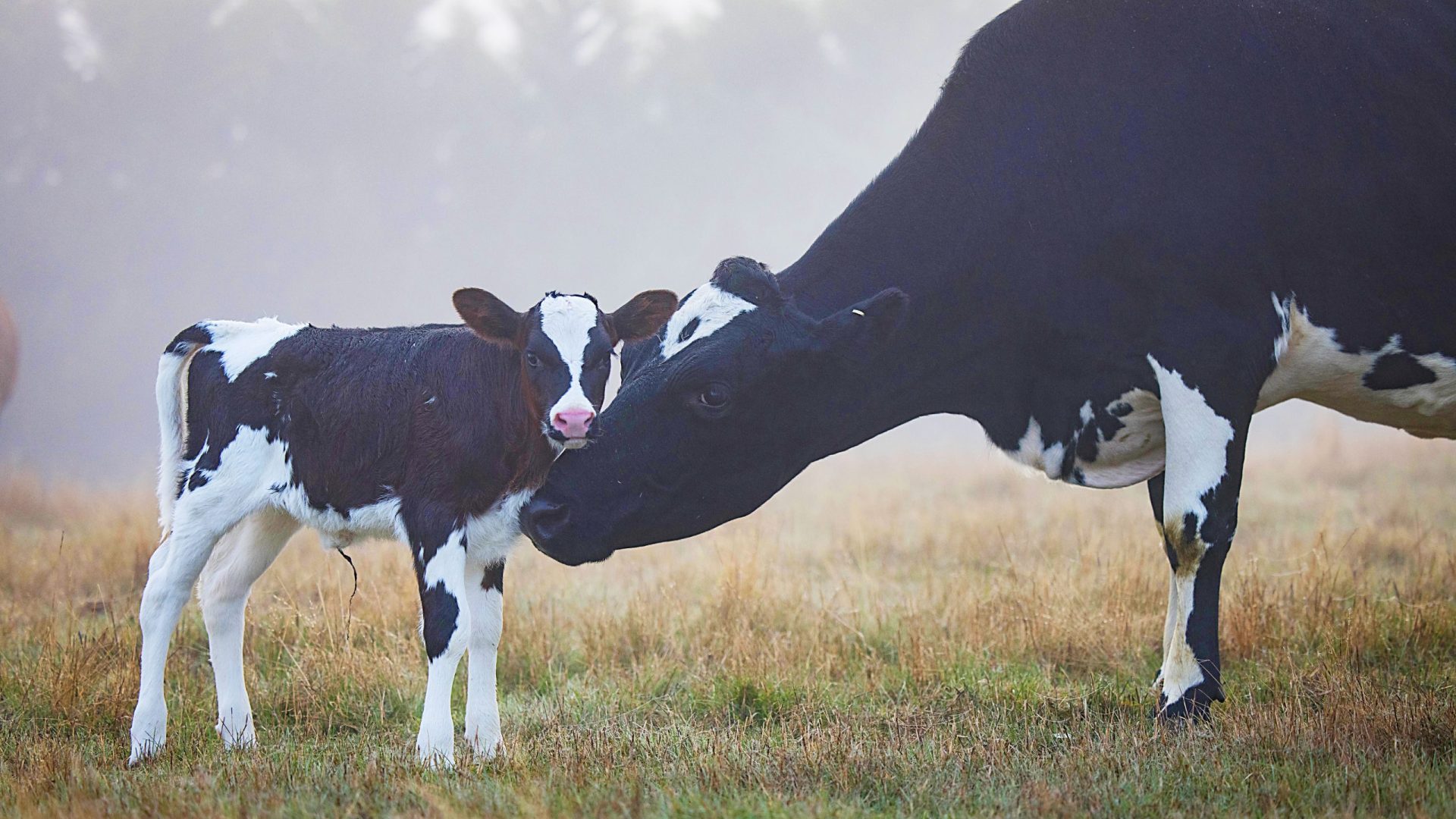 What’s kindest for mother and calf is also best for our shared environment.

Land clearing for animal farming – particularly to graze cattle or grow feed for them – is a key driver of wildlife habitat destruction globally, including in our own back yard.[2] As a result, native animals like the koala remain at risk until we find a better way to share the land that is home to us all. To reduce land and freshwater use, and increase milk ‘output’, some Australian farms are moving cows to indoor systems. Like all factory farming, confining cows indoors denies them the ability to express their most natural behaviours, like grazing on grass.

By reaching for animal-friendly alternatives, cows can be spared from dairy’s cycle of suffering and precious resources can be spared as well. Did you know it takes less land and water to produce a litre of almond, oat, or soy milk than it does to produce one litre of dairy milk?[3]

You can shape a brighter future for cows and their calves.

It was our ancestors who categorised some animals as ‘friends’ and others as ‘food’. This thinking led to today’s outdated laws and practices which treat animals in a way that caring consumers would never have agreed to had they known. The current food system only values animals in terms of what they produce for us, and it is a system we inherited from those who came before us.

The good news is our choices can pave the way to a different, kinder future where animals are seen as someone, not something.

Become a part of a global community that is committed to being the change we wish to see for animals, for the planet, and for each other. We’ll send your free guide to a kinder world your way, to keep you inspired through the year ahead.

Order your FREE guide to a kinder world! Nearly there! Thank you ! Thank you! 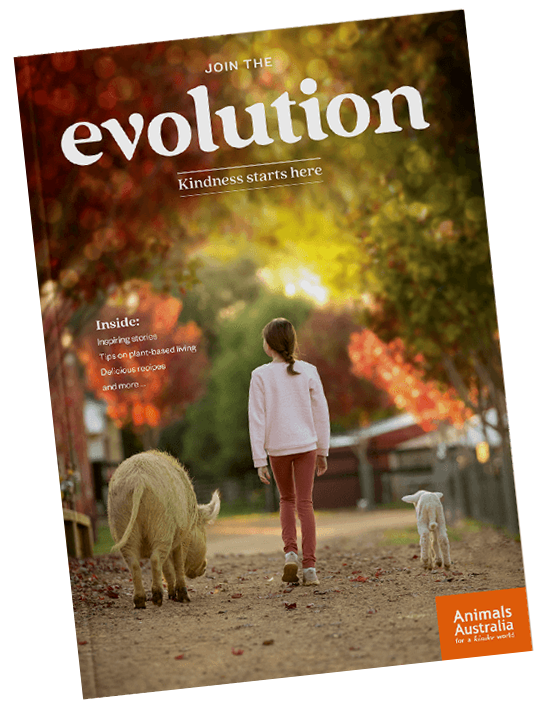 Keep an eye out for your free magazine in the mail, it will be with you soon. Help us spread the word!