You've heard about puppy mills... but what about kitten factories?

It’s not only dogs who can be cruelly confined in intensive breeding facilities. Investigations have uncovered shocking treatment of cats in ‘kitten factories’ across the country. Read on to learn how you can help free them from cruelty.

In January 2015, two stripy little cats with startling green eyes were rescued from a squalid enclosure at a puppy factory. Their only protection from the glaring sun was a blanket, thrown haphazardly across the cage. They had no access to water — although a hose was lying in the dirt, temptingly, just beyond reach.

Mia and Paradise, as these girls were named by their rescuers from Animal Welfare League Queensland, are two of the lucky ones. Tragically, the unlucky farmed cats of Australia outnumber them many times over.

Kitten factories can be extremely difficult to identify. A lack of transparency, regulatory oversight, and the actions of unscrupulous breeders all combine to create what can be, at best, a life of deprivation and chronic boredom for cats and their kittens or, at worst, a living nightmare.

Like Mia and Paradise above, a few breeding cats may be kept as an alternate source of ‘revenue’ in addition to a puppy-factory farmer’s main ‘product’. Other cat ‘producers’ may be hoarders, or backyard breeders, but the welfare risks in all instances are essentially the same: malnourishment, cramped and filthy housing, injuries and illnesses left untreated, and a critical lack of positive socialisation with humans and other animals.

Ultimately, very little is currently known about kitten factory operations in Australia. We know they exist, and that cats are at extreme risk — but where they are, and how many there are, is difficult to determine.

The good news is, by being vigilant, asking the right questions or adopting their next best friend, cat lovers can ensure they aren’t supporting cruel kitten factories.

We’ve compiled a few tips to help you avoid being duped into supporting kitten factory cruelty. Tragically for animals everywhere, the briefest browse through any number of online pet sales websites will uncover many suspicious advertisements. The following ads found on Gumtree ring a number of alarm bells: 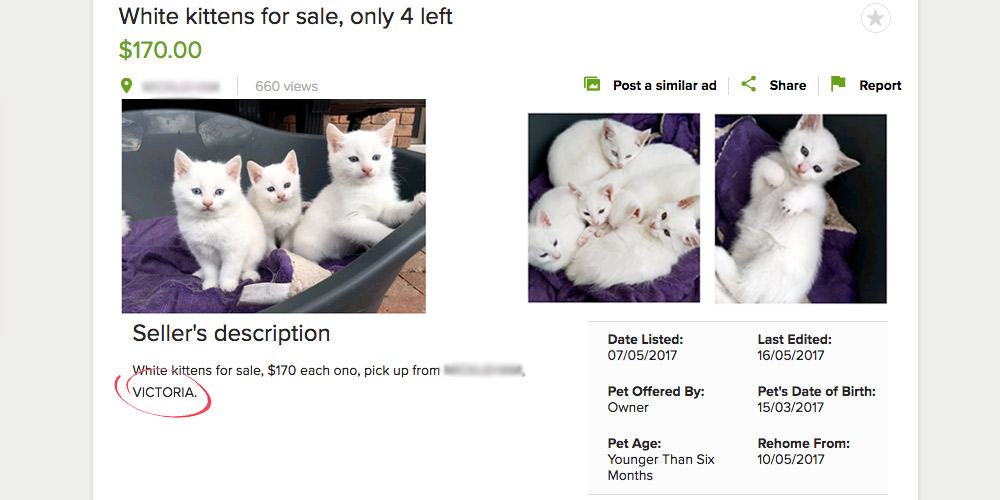 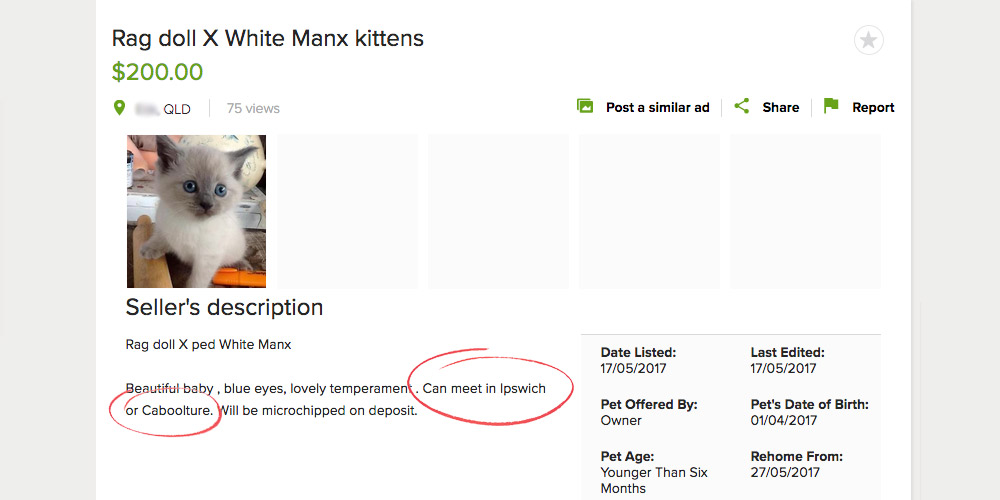 When a veteran cat breeder passed away in 2012, a shocking discovery was made in the backyard of her country Victorian property: some 30 cats and kittens, living in an absolute nightmare.

“I near cried. I can honestly tell you it shocked me to pieces. They were bloody disgusting."
— Breeder’s friend describing the cages.

Locked in tiny cages, and unaccustomed to human contact, the cats and their kittens were caked in filth. They were kept outside, without protective cover, in a region that regularly sees temperatures drop below zero in winter.

Despite breaching Victorian breeding regulations, and being registered with the Feline Control Council of Victoria, it was clear this registered breeder’s property had not been inspected for some time, if ever — this lack of oversight exposed dozens of cats to a life of deprivation and cruelty.

Equally shocking was the revelation that the breeder of these abused and neglected cats had won several Best in Show awards during her ‘career’ in Australia, New Zealand and Europe.

With laws failing to protect animals, it’s up to all of us to help end the cycle of suffering. You can ensure you’re not supporting kitten farm cruelty by adopting — or by personally inspecting the breeding premises so you can see for yourself the conditions your new feline friend, and their parents, live in.

Cats can become pregnant as early as four months of age. They generally breed seasonally, which results in a “kitten tsunami" in the warmer months between November and April. Unrestricted breeding and lax desexing laws result in far more animals being born than there are caring homes for them to go to.

Every year some 50,000 cats enter RSPCA shelters nationwide. While euthanasia rates have been decreasing, there are still thousands of cats who never leave — thousands of loving animals who are killed simply because there are not enough homes to go around.

This tragedy is echoed in pounds and shelters all across the country (with the exception of a handful of shelters with a ‘no kill’ policy) yet unscrupulous kitten farmers and backyard breeders continue to oversupply the market with ‘fresh’ animals.

Laws and regulations are doing little to curb companion animal overpopulation — and nothing to prevent systemic animal cruelty.

How to break the cycle of kitten factory cruelty

All the rules for avoiding the abuse of puppy factories apply to kitten factories as well: