How our emergency grants program is saving lives in war ravaged Ukraine.

A pride of nine lions trapped in a zoo in the war zone in the Ukrainian port city of Odesa has been rescued in a daring 72-hour mission led by South African wildlife sanctuary owner Lionel de Lange with funding from Animals Australia.

Carried out in partnership with UK based organisation, Breaking the Chains, the lions endured a treacherous journey through three countries, travelling inside crates within a convoy of vans before reaching the safety of a temporary home in a facility in Romania. In four months, they will make their final journey to another country where they can finally enjoy a peaceful life in an animal sanctuary.

The private zoo operator who owned the lions recently agreed to relinquish them to Mr de Lange for their safety after the bombing came as close as three kilometres away and he was no longer able to afford the cost to feed them.

Credit: 9 News. The inspiring story of the lions' rescue made news headlines.

“I’m just happy that we got them out as they’ve gone through hell and were seriously stressed but it is their first step towards being cared for and looked after properly in a sanctuary,” Mr de Lange said.

“It was a very long and difficult drive back from Ukraine through Moldova and on to Romania but we were fortunate to have armed security from local police escorts for the Ukrainian and Moldovan legs of the trip,” said Mr de Lange, who has now rescued a total of 39 lions, 13 bears, a wolf and a monkey from Ukraine. 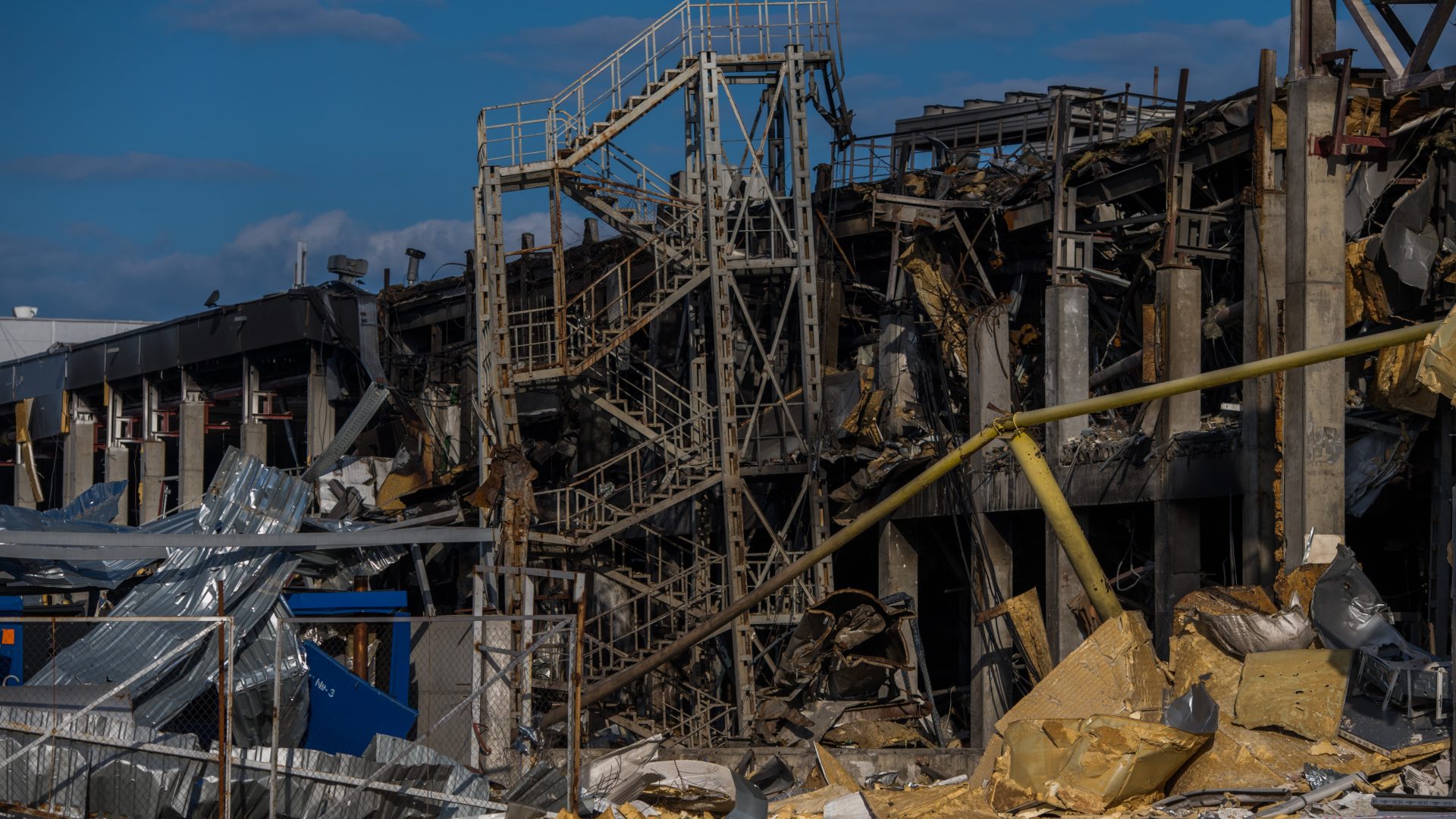 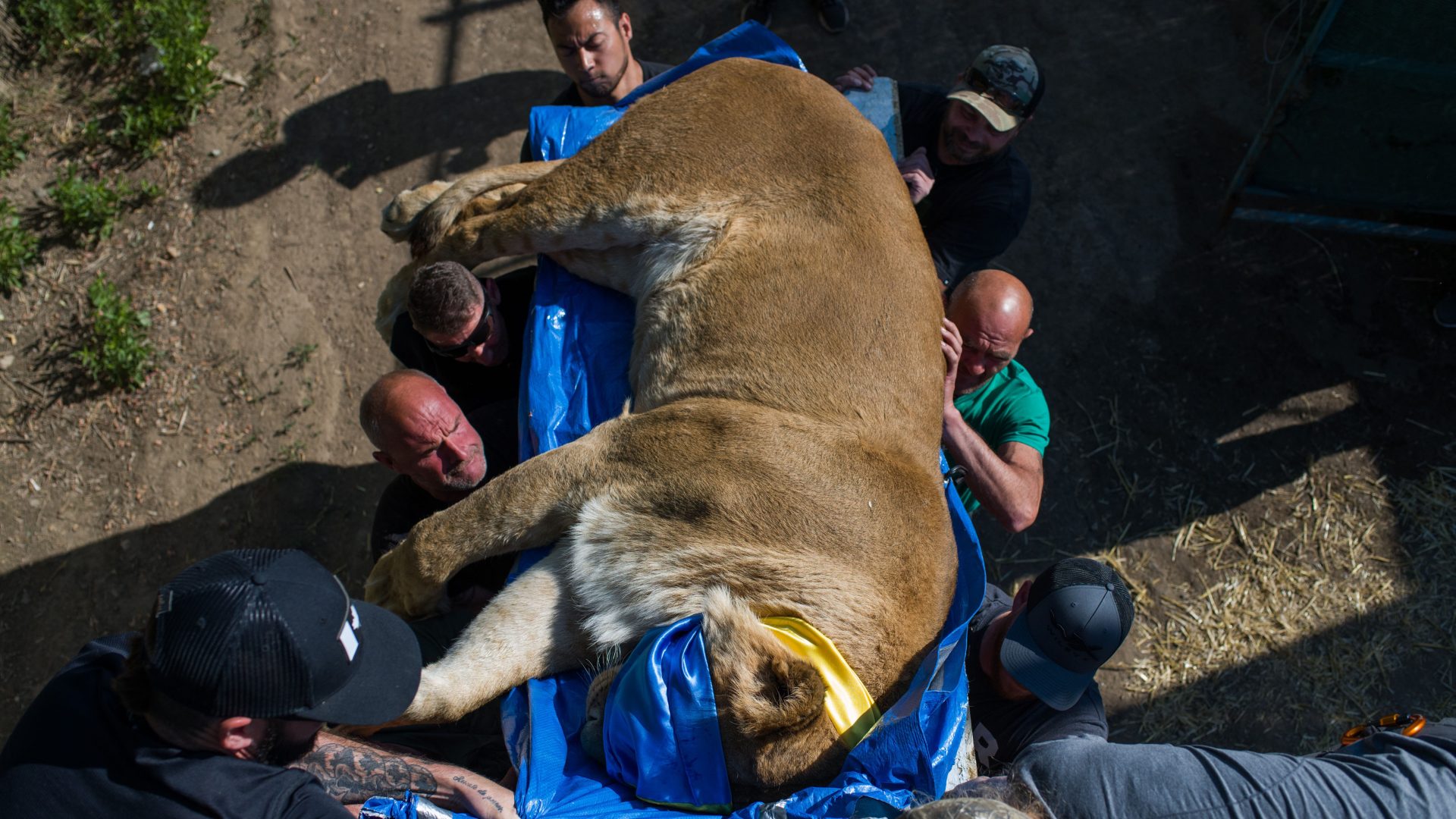 Rescued – A lion is extracted from a zoo in Ukraine.
Image Credit: Nathan Lainé - Magnus News 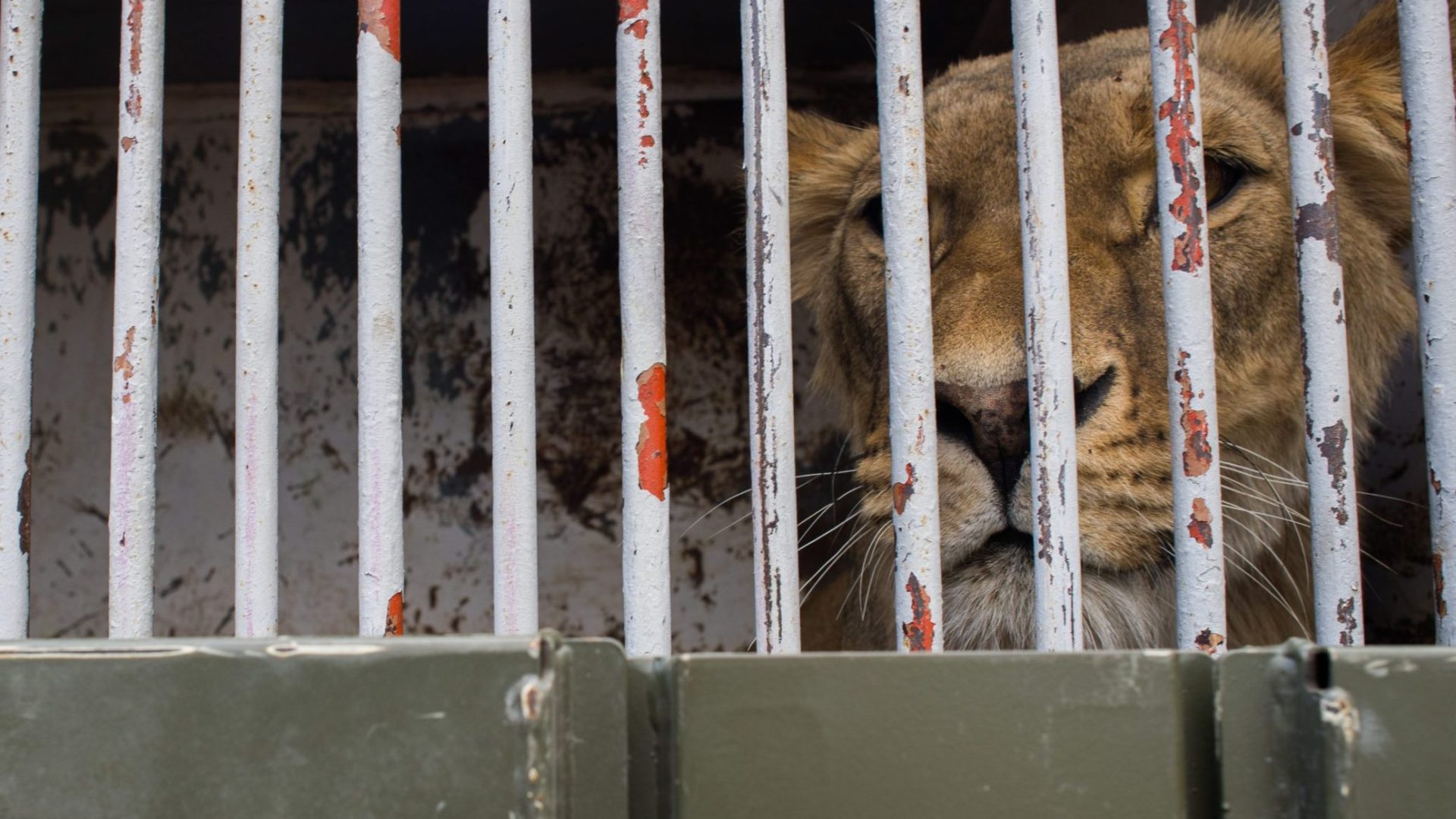 On the road to safety: One of nine lions rescued.
Image Credit: Nathan Lainé - Magnus News 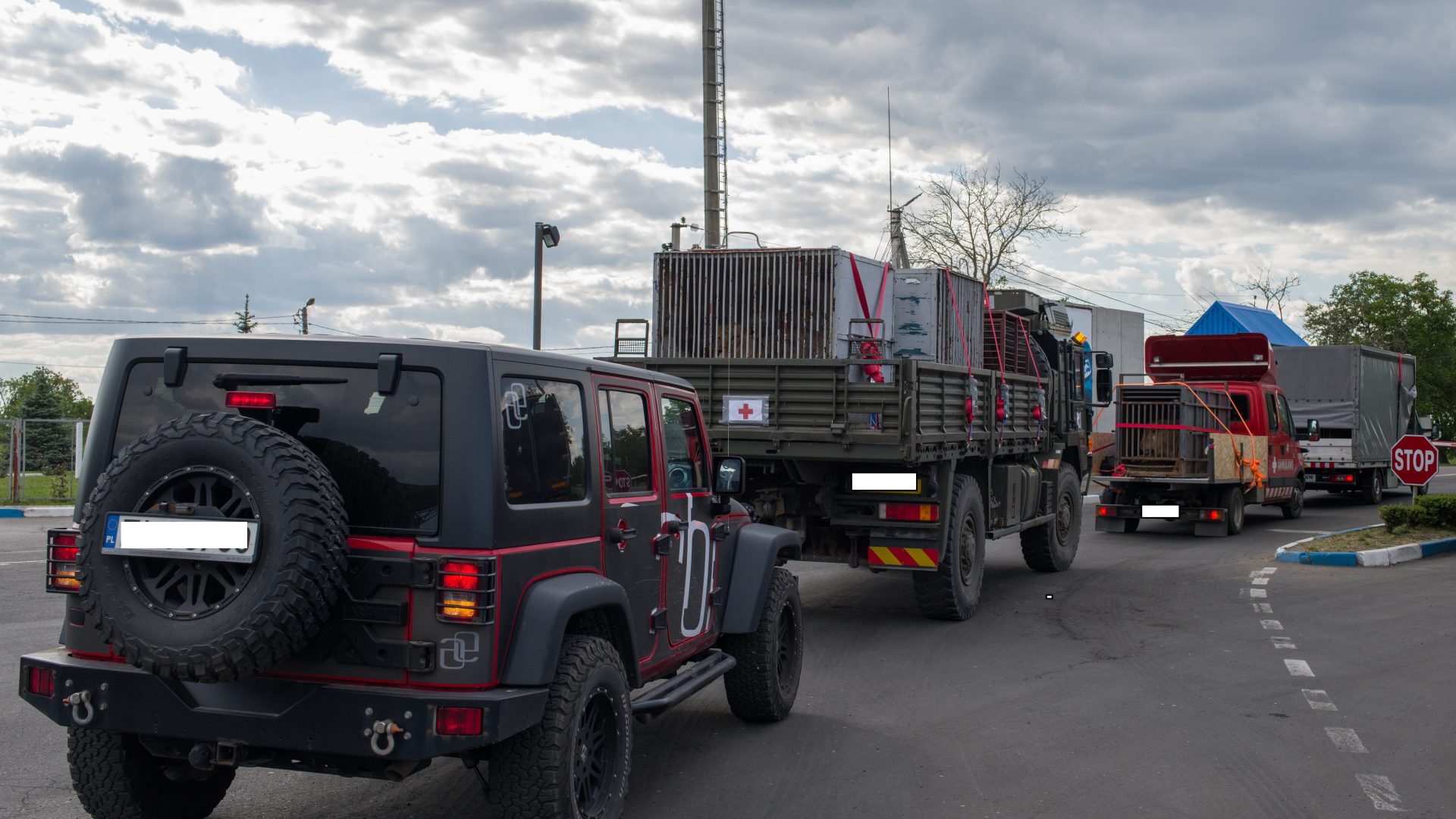 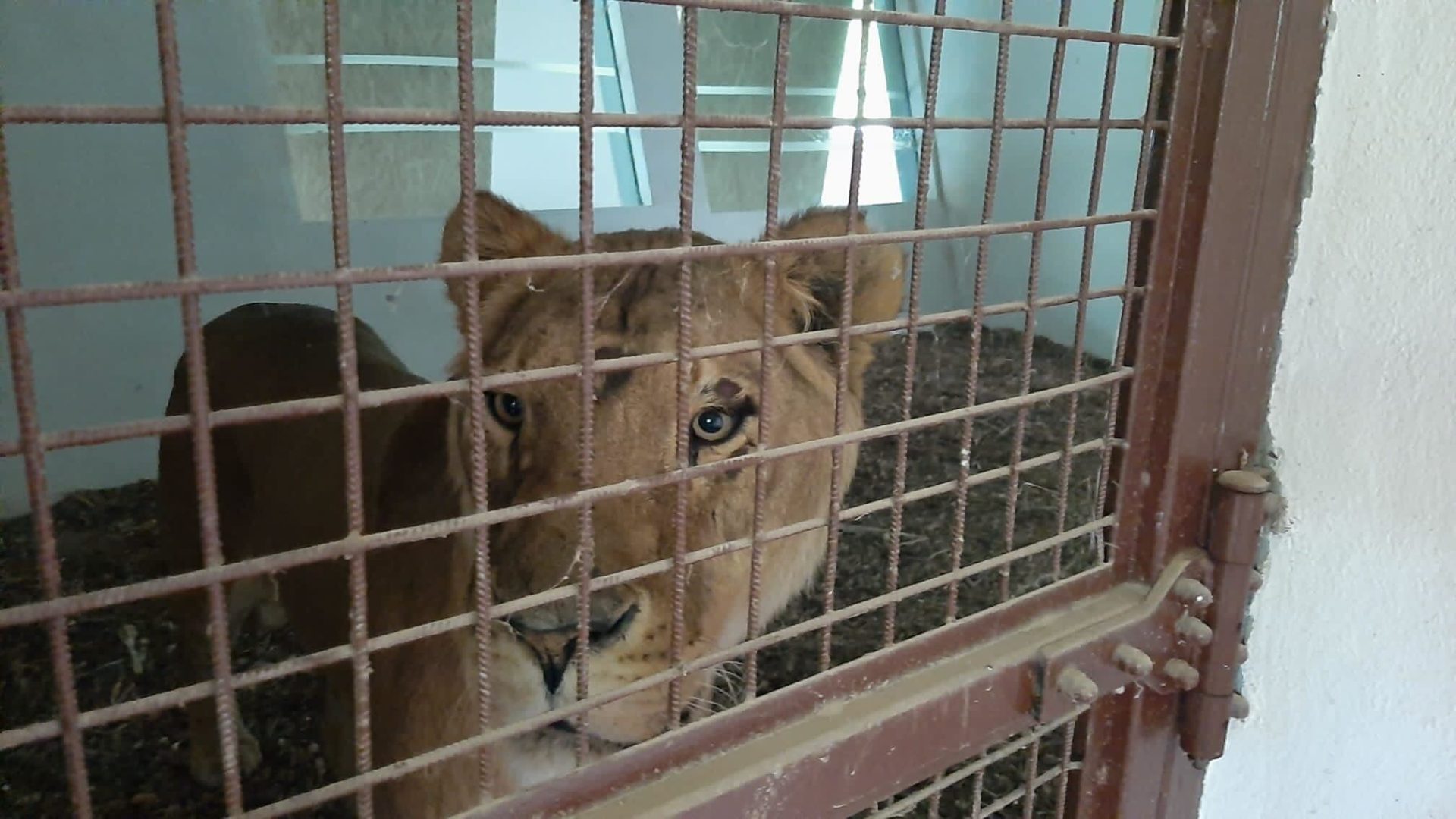 The rescue faced its first hurdle before setting off when an alternative route for the mission had to be found as a bridge had been bombed on the planned route. In addition to the dangers of being in a war zone, the most perilous part of the operation became the loading of the lions into crates as their sedation could potentially wear off unexpectedly. Once the lions were secured in the crates, a reversal drug was administered before the journey.

Mr de Lange’s dream is for the lions to live free within a natural environment rather than in cruel confinement for the entertainment of humans.

“I want them to live the rest of their lives being lions. That’s all. If people want to see lions or learn about them, they can go to the internet,” he said.

Animals Australia donors concerned about the plight of animals caught up in the war in Ukraine enabled the funding of vehicles and other costs for the rescue through our emergency grants program. The rescue team of 13 included former military personnel and a veterinarian.

“The conflict in Ukraine has been devastating for people but also for animals with so many large and small animals that have been left behind,” said Animals Australia Director of Development Louise Bonomi.

“Our team in Europe have helped Ukrainians fleeing the country with their pets at the Ukrainian border and our donors have funded efforts to rescue abandoned cats and dogs within Ukraine,” she said.

“We supported Lionel de Lange’s heroic mission to save these beautiful animals who faced the dangers of both war and starvation if they remained.

“It’s a tragedy that it took a brutal conflict to create a path to freedom for these lions,” she said.

The pride of nine consists of four males and five females ranging in age from seven months to six years.

Two months ago, Animals Australia funded the complicated rescue of a grey wolf and lion called Simba from Ukraine. Both are now safe in Romania.

After a life in a concrete enclosure in captivity, Simba will soon depart Europe with another rescued lion named Mir to roam free within his natural bushland habitat at Simbonga Sanctuary, a sanctuary on the Eastern Cape of South Africa that Mr Lange established last year as a home for some of the lions he has rescued from Ukraine.

Mr de Lange admitted he was nervous before setting off on the mission in the war-torn country. “I’ve been into the war zone three times now and it makes you very wary and very cautious but I’m not a hero,” he said. “I was nervous.”

Mr de Lange’s efforts to rescue wild animals from Ukraine began long before the Russian invasion. He had been living in the country since 2014 with his Ukrainian wife running a charity assisting street dogs and started his Warriors of Wildlife charity to save wild animals living in poor conditions in Ukraine’s many private zoos.

During his previous wildlife rescues in Ukraine, Mr de Lange has been shot at and survived an attempt to run him over – all before the war began.

When Russia invaded in February, the former tech and restaurant entrepreneur was forced to flee his Ukrainian home and returned to South Africa. But he did not forget the plight of the many wild animals kept in private zoos throughout Ukraine.

“I got quite emotional when I heard that Animals Australia would support this rescue and I’d like to thank Australians for helping me in this attempt to save these lions from a grim future,” he said.