The fires that have ravaged many parts of Australia during the recent bushfire crisis tore through the country with such a tremendous ferocity that there was simply no chance of anything – or anyone – surviving. With a land area nearing the size of England impacted by fires, there has been much international focus on the sheer scale of destruction – of precious bushland, properties, and ecosystems. Conservative estimates of more than one billion native animals killed have been met with shock, heartache, and utter helplessness.

It is difficult for the human brain to process a number so massive – it becomes an abstraction, almost meaningless in terms of communicating what that means for the animals affected. But when vision of dead or injured animals inevitably confronts us, and the reality for each individual animal impacted by fire becomes all too real, it is understandable that our brains attempt to protect us. To allow us to consider the experience of one suffering animal and then multiply it by two… three… four… all the way up to 1.25 billion … the sheer scale of suffering is simply too much for our minds to comprehend, and our hearts to bear.

It is during these times of incredible collective anguish that we see the very best of humanity shine. We have spoken at length about the veterinarians, community members, wildlife carers and rescuers who have been on the ground since day one, working in the most difficult of circumstances, united in their courage and compassion, and their will to alleviate suffering and save lives. In the darkest of times, they have given us glimmers of desperately-needed hope with every life they have saved, every animal they have reached, and every moment we know they are out there, doing the work that so few of us could bear to do.

We’ve said it before and we’ll say it again – these people are heroes.

[[ Insert one of Jo’s pics of Howard Ralph here]]

Beyond the immediate rescue efforts, animals with burn injuries require a tremendous amount of specialised, intensive care that can go on for weeks and months. And so the huge outpouring of support to Australian wildlife organisations is not only welcomed, but very much needed, as the work to rehabilitate rescued animals will continue well beyond fire season.

At Animals Australia, we’ve been fortunate enough to be in a position that we were able to assist with these recovery efforts. Though we are not exactly known for our work with wildlife, we recognised the enormity of this situation, the gaps in the government response, and importantly, our responsibility as an animal protection organisation to do whatever we could to make sure support got to where it needed to be, and quickly.

This involved acting as a fundraising intermediary, helping to get money in the door and straight back out to individuals and groups on the ground. Through our networks, we’ve been able to collaborate with and coordinate rescue teams, unencumbered by bureaucracy and willing to do whatever is needed – to get people, veterinary supplies, resources and animal feed into fire-stricken areas, and providing direct and immediate financial support to fast-track rescue and relief efforts across the country.

Sadly, natural disasters at this scale are likely to be an increasing and ongoing challenge for Australians, a country being touted as “ground zero" for both the impacts of climate change and policy uncertainty – with increasingly severe natural disasters expected to be part of our new reality. Disaster response at this scale is a new area for Animals Australia. It’s been a busy and often challenging time for our team, it’s been a time of great learning. and it has given us a renewed appreciation for the power of compassion, and the unwavering support of the many wonderful people we are honoured to be able to connect with across the world.

The response to Australia’s bushfire crisis has also revealed that the conversation around the devastating suffering and loss of life is missing something. Or, more to the point, someone.

An estimated ten million sheep and cattle have died in the bushfire crisis.

Again, to think of them in terms of numbers killed is to protect ourselves from truly grasping the depth and scale of their suffering, a perfectly reasonable response from any compassionate person. But the conversation surrounding these animals and their experiences, during and after natural disasters, tells us a lot about a system in which we all live and participate in — a system in which an individual’s ‘worth’ is constrained by our limited rules about how we classify them.

These rules at their simplest divide animals into two main groups — “friend" or “food" (but consider other ways we think about animals differently based on the category we put them in – terms such as “native" or “feral", or “companion" or “livestock" – and the different feelings and values that are conjured by these words). This is a belief system we have inherited that churns away just below the surface of our society, that remains largely unacknowledged and thus, unchallenged — but it underpins our treatment of the millions of animals we share this planet with.

We have been born into a system that allows little consideration to be given to the experience of the individual, despite all animals sharing the capacity to suffer. 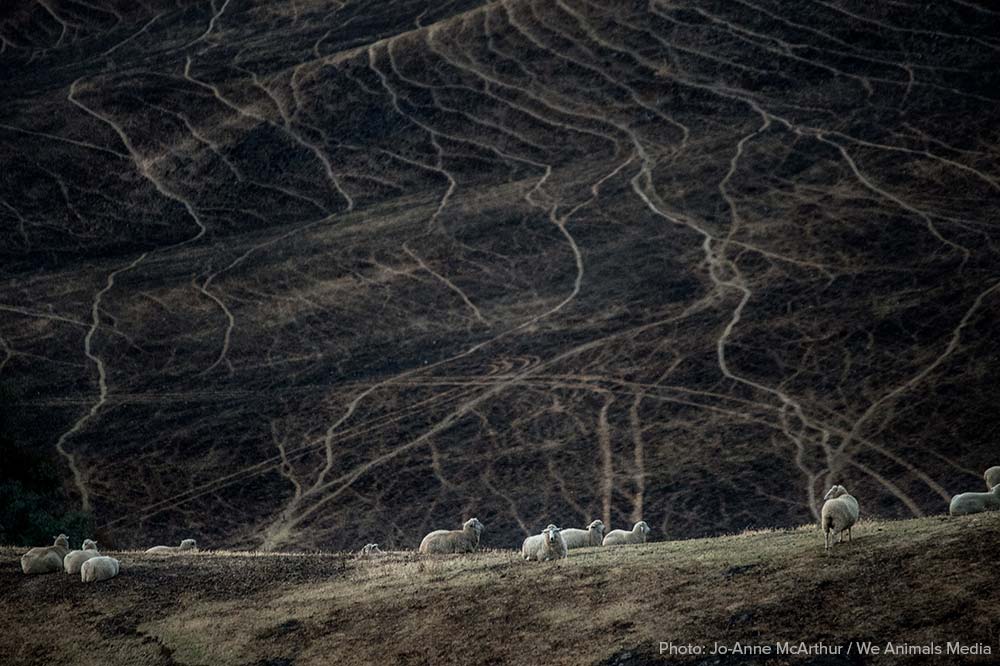 Harrowing images of the bodies of sheep lining barbed wire fences, of cattle with burnt feet so painful they can no longer stand, or the distressing vision of animals trapped inside fenced paddocks surrounded by flames, in imminent and mortal danger… these images trigger the same feelings of heartache, rooted in empathy and compassion, as do images of koalas or wombats in similar levels of distress.

But the more complex relationship we have with other non-native species is evident in the language we use around them, and in the direction of our collective support and empathy. When it comes to the suffering and death of farmed animals, this conversation is often limited to talking about these animals in terms of “livestock losses" and “loss of genetic lines". These are animals who have rich emotional lives, form strong bonds with others, become distressed when separated from their friends, felt tremendous fear, sought safety, and who suffered beyond imagining in the fires. Each of them had a story, and their experiences, and their inherent worth as individuals has largely been denied to them, by omission. 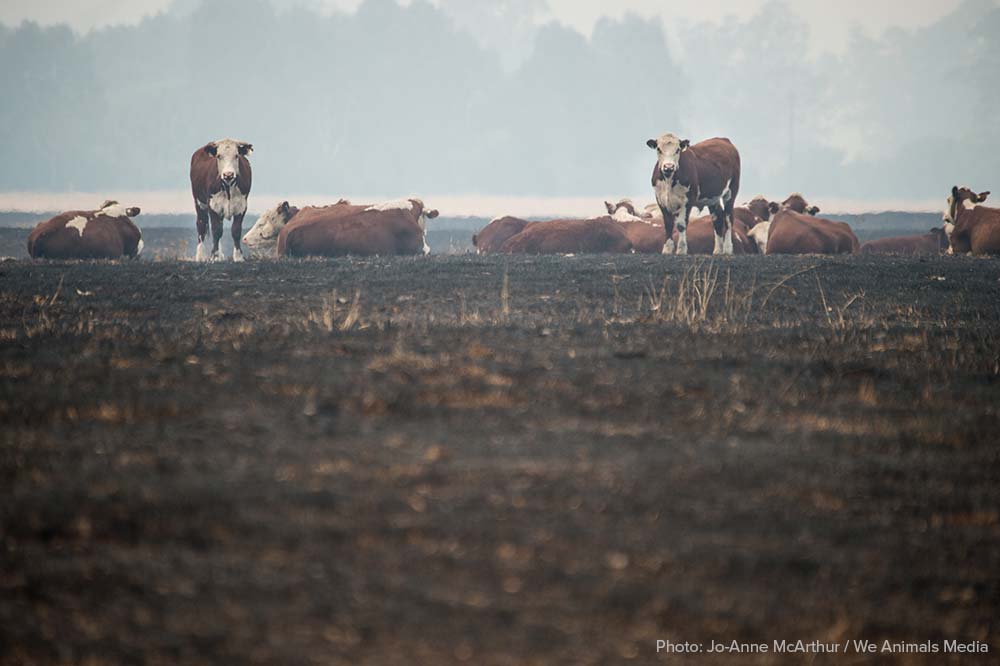 But they weren’t entirely forgotten. In the aftermath of the bushfire crisis, we were heartened by how many people were reaching out to us to ask how they can assist farmed animals in fire-affected areas. Of course, as an organisation whose mandate is to help farmed animals, this was front of mind for us too. But while the bushfire relief response generally has been challenging for a myriad of reasons, the response to farmed animal assistance comes with an additional layer of complexity that can make intervention by external parties (prohibitively) difficult. And this is rooted in the way our society values farmed animals, not for who they are, but by how much money their bodies can make.

When large numbers of farmed animals die, this tragic loss of life is immediately treated as a ‘biohazard risk’. This is a major concern to both federal and state government departments tasked with representing the economic interests of animal agriculture. This is reflected in disaster response policies that elevate biohazard management as a priority above all else – which on a practical level, translates to disposing (usually burying) the bodies of farmed animal victims as quickly as possible.

The ‘viability’ of surviving animals is also considered to be a major point of focus. In the wake of the recent fires, officials from state governments deployed assessment teams to properties to assist in determining the number of deaths of farmed animals, and veterinarians from various organisations were also deployed to assist with determining the ‘viability’ of survivors.

Unlike with wildlife, for the vast majority of farmed animals who have survived the terror and pain of fires, there is no prospect of rescue, no consideration to rehabilitate, and to provide intensive and specialised veterinary care and support.

For sheep and cattle who have held on through the heat, fire and smoke, only to survive with injuries – they are graded as financially “viable" or “unviable." And of course, for some so badly burnt, to be declared the latter is undoubtedly in the best interests of that individual if it leads to immediate euthanasia. But for others who may be injured but still determined to be financially ‘viable’, this determination will only lead to further stress of transport, saleyards and the slaughterhouse, whether imminently or later in their lives.

[[ possibly include one of jo’s saleyard pics here]]

A sad but important point to mention here is that there simply are not enough veterinarians or members of state or federal authorities with appropriate firearm licenses to be able to euthanise large animals if required, which meant animals were either left to languish, or this incredibly difficult task was left to farmers and other community members, compounding the trauma that comes with being directly impacted by bushfires. The emotional toll of mercy killing is one that affects everyone, whether they’ve done it once or a thousand times. Just about any veterinarian will tell you that. And this is not something that should be wished upon anyone, let alone survivors of bushfires, who have already suffered so much. But it is necessary work when there is no plan ‘B’ for the vast majority of farmed animals impacted by fires.

All this to say, when your value is measured in dollars, there is very rarely a ‘happy ending’, in the wake of natural disasters, or otherwise.

This dark reality is not something you will find covered in the mainstream media, with the deaths of farmed animals mourned only in terms of the impact that their deaths have on humans — lost income and flow-on effects such as inflated insurance premiums.

As the imminent threat of fires makes way for the gruelling and long-term task of assessing, rebuilding and moving forward, there is no doubt that there need to be very serious discussions and an urgent review of policies and processes among governments, authorities and organisations to ensure a more efficient and coordinated approach to assisting animals in the wake of future disasters, no matter the species.

Affected communities have been decimated by this disaster, and the love, support and solidarity shown to Australians during this difficult period is rightly placed and desperately needed. We have been heartened by the incredibly valuable and important conversations about ‘next steps’ around climate policy, land management, coordinated disaster response, and our own species’ relationship with nature more broadly.

And as life begins to slowly return to the post-apocalyptic landscapes left behind by the fires, perhaps there is space, too, for wider society to think about how we can carve a new path forward, and a future in which all animals are valued — and mourned — not for how much money they are ‘worth’, but for who they are.